The theme for this week’s illustration on sugarfrostedgoodness.com is “blue” 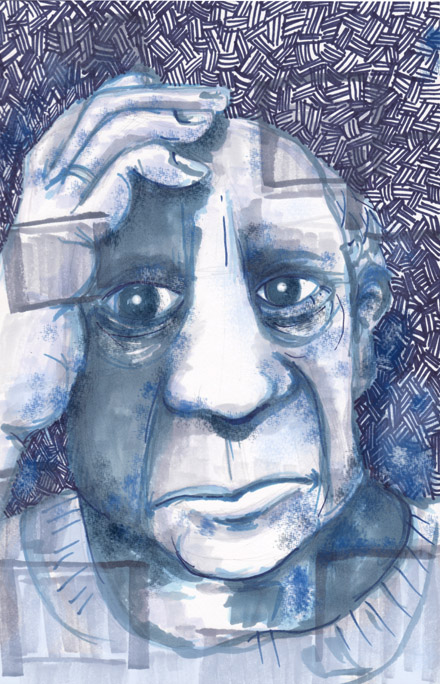 Pablo Diego José Francisco de Paula Juan Nepomuceno María de los Remedios Cipriano de la Santísima Trinidad Clito Ruiz y Picasso is one of the most recognized figures in 20th century art. He is best known as the co-founder, along with Georges Braque, of cubism.
Picasso was born in 1881 and attended art schools throughout his childhood. He never finished his college-level course of study at the Academia de San Fernando in Madrid, leaving after less than a year. Soon, he made his first trip to Paris in 1900, the art capital of Europe. In Paris, he lived with Max Jacob, a journalist and poet, who helped him learn French. Max slept at night and Picasso slept during the day as he worked at night. There were times of severe poverty, cold, and desperation. Much of his work had to be burned to keep the small room warm.
In Paris, Picasso kept a distinguished group of friends, including writer André Breton, poet Guillaume Apollinaire, and writer Gertrude Stein. In 1911, Apollinaire was arrested on suspicion of stealing the Mona Lisa from the Louvre. After questioning he was released, but implicated his friend Picasso. Picasso was also questioned and later the two were exonerated.
Picasso’s Blue Period is the period between 1901 and 1904, when he painted essentially monochromatic paintings in shades of blue. These somber works are now some of his most popular, although he had difficulty selling them at the time. Picasso was influenced by a journey through Spain and by the suicide of his friend Carlos Casagemas, who took his life at the LHippodrome Café in Paris, by shooting himself in the right temple. The suicide marked the onset of the blue period. “I started painting in blue when I learned of Casagemas’s death.,” Picasso said.
His Blue Period was followed by his Rose Period, his experiments in the different aspects of cubism and a period of surrealism.
Picasso died in 1973. At the time of his death many of his paintings were in his possession, as he had kept off the art market what he didn’t need to sell. In addition, Picasso had a considerable collection of the work of other famous artists, some his contemporaries, such as Henri Matisse, with whom he had exchanged works. Since Picasso left no will, his estate tax was paid in the form of his works and others from his collection.