The challenge over at Monday Artday this week is “retro“. 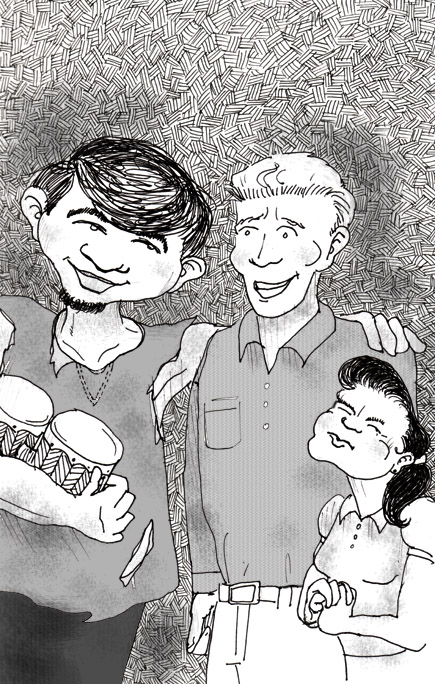 I love old television shows. Mostly, I love shows from the late 1950s through the 1970s. Shows like Leave It To Beaver, The Andy Griffith Show, The Munsters and many others. These were true situation comedies. Totally unreal, far-fetched and implausible. These shows usually depicted perfect families faced with a horrible crisis, like Beaver losing his baseball glove or Opie knocking a bird’s nest from a tree. After a while, these simple shows made way for more realistic sitcoms, like All in the Family, and M*A*S*H, leaving their cast to try to shake typecasting or to fade into TV oblivion.
Of all of these shows, the best example of a true “retro” sitcom was The Many Loves of Dobie Gillis. It presented the wholesome adventures of a teenager and his family and friends. Dobie’s main concern was girls, especially Thalia Menninger. Dobie’s best friend was beatnik Maynard G. Krebs and his rival for Thalia’s affections was Milton Armitage. And there was Zelda Gilroy, for whom Dobie was “the living end”. A happy little TV world. A far cry from the reality of the assassination of President Kennedy, Fidel Castro and the Cuban missile Crisis and the impending war in Viet Nam. When the show ended its four-year run, its stars entered a real life of which their characters could never have dreamed.
Dwayne (Dobie) Hickman became a high-ranking programming executive at CBS. Bob (Maynard) Denver was stranded on an uncharted island off the coast of Hawaii for 3 seasons, until he became a radio DJ in West Virginia, where he smoked a lot of marijuana. Warren (Milton) Beatty slept with every woman in Hollywood (except Shirley MacLaine), eventually settling on Annette Bening. Tuesday (Thalia) Weld became the cover girl for Matthew Sweet’s awesome album “Girlfriend“. Sheila (Zelda) James, who longed to have her unrequited love for Dobie reciprocated (even though anyone with a minimal sense of “gaydar” knew otherwise) was the first openly gay person elected to the California State Senate.