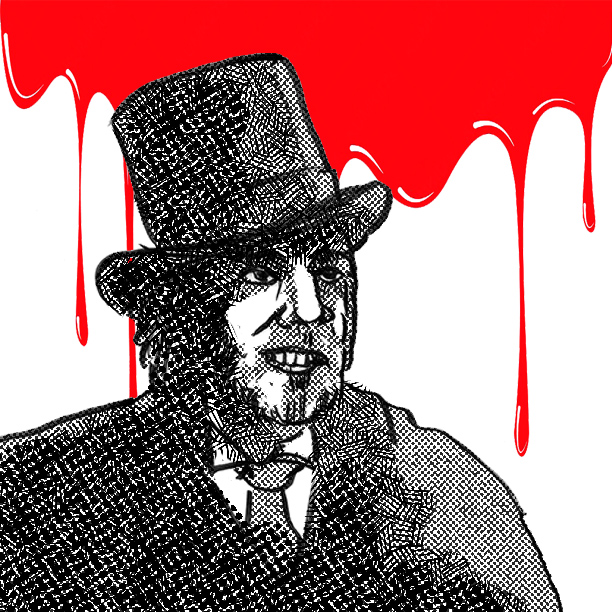 Wow! It’s already October! And you know what that means. Well, it might mean something different to you, but for a bunch of artists (and me), it means another round of Inktober. Based on a set of suggestions from the official Inktober website, artists (whom I selfishly and preposterously number myself among) create special works daily just for October, based on those suggestions. And once again, I’ll be making up my own rules of participation. I will be posting a new, black & white drawing (and a little bit of red) each week for the entire month – in addition to my participation in the regular Inktober 52 and, if I feel like it, another random drawing here and there. Every year, I choose a theme in keeping with the “spirit” of the Hallowe’en season. This year, my drawings will feature a selection of horror movies to which Hollywood gave its highest honor. In its 92-year history, only 18 horror movies have been awarded Oscars. While, in my personal opinion, the Oscars (and all awards) are meaningless, this slight to a very popular genre is ridiculous.

So let’s kick things off with Week 1’s entry. It’s Frederic March’s portrayal of the classic “good and evil” dichotomy in the 1931 version of Dr. Jekyll and Mr. Hyde. An early entry in the “talkie” horror film category, this take came on the heels of two of Universal Studios blockbusters – Dracula and Frankenstein. The eerie transformation sequence in the film was kept a secret for years by director Rouben Mamoulian. It was also notable for its pre-Hayes Code production, heavy with overt sexual content. When it was re-released five years later, eight minutes of footage was removed.

Frederic March shared the “Best Actor” award with Wallace Beery for The Champ in a rare tie. The film was remade ten years later with Spencer Tracy. It was panned by critics.