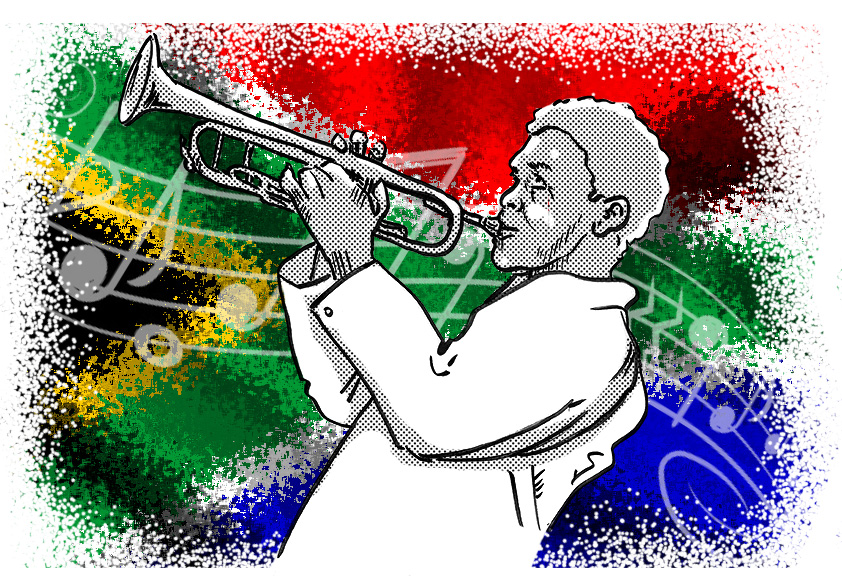 14 year-old Hugh Masekela was inspired to pick up a trumpet after seeing Kirk Douglas in the 1950 film Young Man with a Horn. He sought out someone to teach him to play with the help and guidance of his friend, Johannesburg Archbishop Trevor Huddleston. Soon, Hugh was writing music that was reflective of his turbulent surroundings.

At 20, he formed an ensemble called Jazz Epistles and they recorded the first album by an African jazz band. The Jazz Epistles toured for a year, until the 1960 Sharpeville massacre — where nearly 70 protestors were shot to death. The South African government banned gatherings of ten or more people, prompting Hugh to flee the country. He headed to England and then the United States, where he was befriended by singer/actor Harry Belafonte. Hugh took classes at the prestigious Manhattan School of Music, honing his already-superior trumpet skills.

In 1967, Hugh released a jazz-inflected take on “Up Up and Away” and followed it up with his version of “Grazing in the Grass.” He scored a major hit with “Grazing in the Grass” — selling over four million copies — and was invited to perform at the 1967 Monterey Pop Festival. Later, Hugh was instrumental in organizing “Zaire 74,” a music festival centered around the “Rumble in the Jungle” boxing match between George Foreman and Muhammad Ali. Hugh lent his inimitable sound to The Byrds on “So You Want to Be a Rock ‘n’ Roll Star,” as well as Paul Simon’s “Further to Fly.” Hugh was asked to open shows for Simon on his Graceland worldwide tour.

Hugh continued to explore different types of African music, experimenting and mixing it all together to form his own unique sound that was constantly evolving. In his 70s, Hugh played with The Dave Matthews Band during a concert in Johannesburg. In 2016, Hugh reunited with his Jazz Epistles bandmate Abdullah Ibrahim, performing together for the first time in 60 years.

Hugh was diagnosed with prostate cancer and succumbed to the illness in January 2018 at the age of 78.