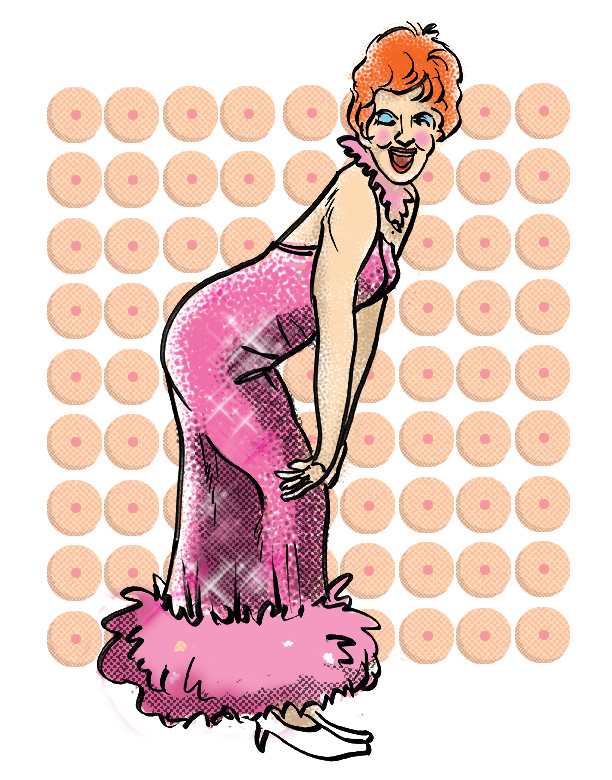 While Julie London was crying a river and Peggy Lee had a fever, Rusty Warren was calling on women nationwide to heed her battle cry of “Knockers up!”

Ilene Goldman studied music at the New England Conservatory of Music. She performed in small clubs in and around the Boston area and even claimed Boston Pops conductor Arthur Fiedler as her musical mentor. But as the conservative 50s became the 1960s, Ilene, using the stage name “Rusty Warren,” relaxed her inhibitions and became the unofficial “Mother of the Sexual Revolution.” Her act went from simple songs with piano accompaniment to bawdy free-for-alls filled with raucous singalongs. Rusty peppered her stage banter with decidedly salty language. She spoke freely and frankly about sex, hoping to encourage women to speak openly about their own sexuality. While up-and-comers like Joan Rivers, Totie Fields and Phyllis Diller were doing their best to break mainstream comedic barriers in the male-dominated field of stand-up, Rusty took a skewed route, aligning herself with folks like Redd Foxx and Moms Mabley. This was the 1960s! Respectable women didn’t speak like this! But Rusty didn’t care. She spoke her mind and spoke for those who were too shy to express how they felt. And she was hilarious! Recordings of her live shows were marketed as “party records,” with instruction to be listened in a social environment.

Rusty released 15 albums over the course of her career. Her most successful, 1960’s Knockers Up!, debuted at Number 31 on the Billboard charts. It remained on the charts for three years and sold over one and a half million copies. Rusty’s modest fan club grew its membership in 1962, swelling to over 70,000 members.

I was around 14 the first time I heard Rusty Warren. I was a big fan of the Dr. Demento syndicated radio show. One night, the good doctor spun Rusty’s 1961 single, the anthemic “Bounce Your Boobies.” Here was this woman — sounding not unlike my grandmother — rallying her female cohorts to “show the guys we have something to give in this world today.” The song was funny and sexy and — to my 14-year-old sensibilities — dirty. I loved it!

Rusty passed away in her sleep on May 25, 2021. She was 91. She left behind a small, but significant, contribution to women everywhere.