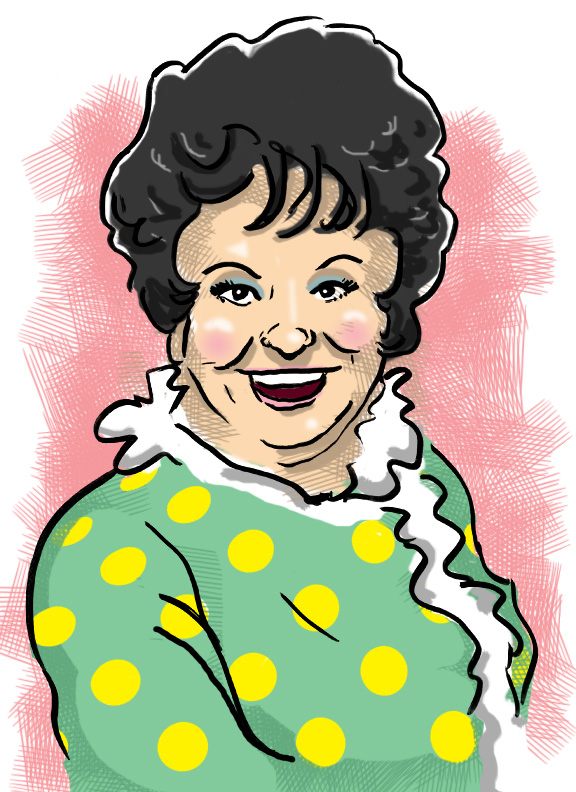 While still in high school, she sang and told jokes in clubs in the Boston area, not far from her native Hartford, Connecticut. Her talent and unique routines brought her to larger venues, including New York’s famed Copacabana. It was here that Ed Sullivan caught her act. Intrigued by her humor in a field dominated by men, Sullivan booked Totie on his popular Sunday night showcase. She was a hit and made numerous appearances. Much in the vein of contemporaries Joan Rivers and Phyllis Diller, Totie used herself as the butt of her jokes. She became a regular guest on talk shows where she spoke her mind poked fun at her weight. During a stint as co-host on The Mike Douglas Show, Totie famously commented to a leather-clad and fully made-up Gene Simmons of KISS, “I’ll bet under all that, you’re a nice Jewish boy.” Simmons smiled and replied, “You have no idea.”

In 1976, health problems resulted in the amputation of Totie’s right leg. After a brief recovery, she went back out on the road, doing her act with the aid of a scooter and still joking about her health issues. The following year, she taped a comedy special for HBO, where she joked from the confines of a wheelchair, “I finally weigh less than Elizabeth Taylor.” She suffered two heart attacks during her rehabilitation. In December 1977, she was diagnosed with breast cancer and had a mastectomy. Afterwards, she still performed and joked about her health.

Just prior to opening a two-week engagement at the Sahara Hotel in Las Vegas, Totie experienced a fatal pulmonary embolism. She was pronounced dead at Sunrise Hospital. She was cremated and her ashes interred in a Las Vegas cemetery, later moved to Los Angeles upon the death of her husband. Totie was 48 years old.