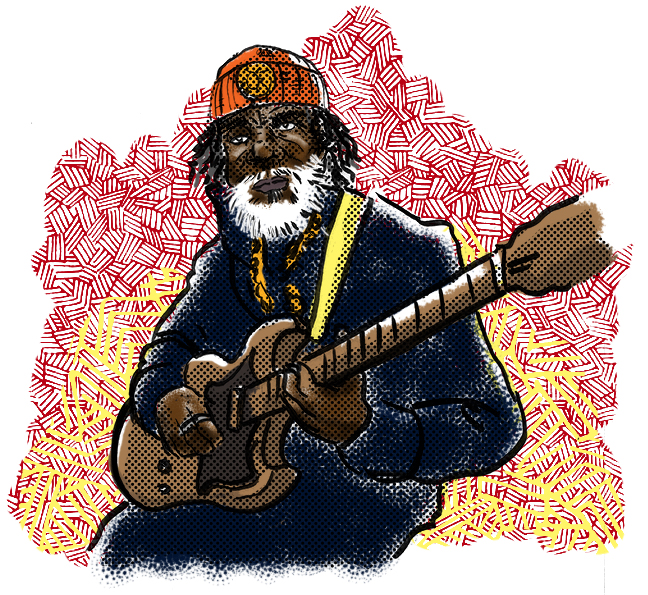 Sterling Magee was a session guitarist in the 1960s, playing on recordings by Ray Charles, James Brown, King Curtis and Marvin Gaye. He also released a few solo recordings on Ray Charles’ record label. But, Sterling walked away from it all, angered by the way black musicians were treated in the music industry.

Sterling landed in Harlem and began playing on the corner of 114th Street and Broadway, near the famed Apollo Theater. He played guitar and supplemented his sound with a high-hat drum, which he rigged to play with his foot. Sterling adopted a new name to go with his new musical direction. He called himself “Mr. Satan.”

In the late 80s, Adam Gussow, an English Masters student at Columbia, saw Sterling performing while on his way to the Apollo. He asked the musician if he could join him on harmonica. Sterling obliged and their collaboration became a regular occurrence. Soon, their street act caught the attention of a film crew, in New York to document U2’s performances. The thirty-nine seconds of Sterling’s tune “Freedom for My People” that was included in the U2 documentary Rattle and Hum led to Satan and Adam signing their own recording contract with Rhino Records. The unlikely pair released albums and toured the world, playing music festivals and spanning genres with their blend of blues, R&B, funk and gospel. They separated several times throughout the course of their partnership, but returned and regrouped to perform again.

In 1998, Sterling relocated to Virginia. He suffered a nervous breakdown and disappeared from public performances. Adam Gussow became a professor of English and Southern studies at the University of Mississippi. In 2000, Sterling surfaced at an adult care facility near St. Petersburg, Florida. His guitar skills, which had vanished after his breakdown, slowly returned. He joined up with Gussow and a Tampa drummer and the newly formed trio performed live once again. Gussow released a collection of early Satan and Adam recordings in celebration of their reemergence. Another new album followed, as well as an appearance at Jazzfest in New Orleans, a return engagement for the duo for the first time since 1991. Their history was chronicled in a 2019 Netfilx documentary.