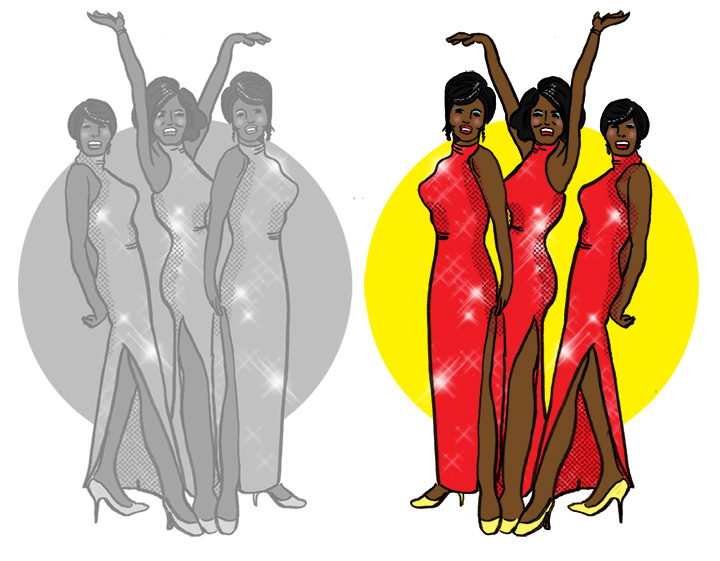 The Supremes were a hit-making powerhouse. In 1967, riding high on a succession of twelve Top Ten singles — 10 of which hit Number One — the trio released their first foray into the fledging genre of “psychedelia.” Smack in the middle of the so-called “Summer of Love,” Motown Records issued “Reflections” with an arrangement that was somewhat jarring as compared to the straight-forward instrumentation of the Supremes’ previous singles. “Reflections” is often cited as one of the first mainstream pop songs to feature a Moog synthesizer. However, the strange sounds on the song are actually recordings of a test oscillator (a piece of studio equipment) that have been manipulated electronically. Later in the year, perhaps based on trends in the music industry and the success of “Reflections,” Motown purchased a Moog synthesizer for their studio.

“Reflections” also marked the first time The Supremes were credited as “Diana Ross and the Supremes,” pushing the attractive and popular lead singer to the forefront. “Reflections” was recorded in March 1967 with original members Diana Ross, Mary Wilson and Florence Ballard. But there was bubbling turmoil within the group. Florence Ballard was unhappy with the focus on Diana Ross, while she and colleague Mary Wilson were relegated to back-up status. Just a few weeks after the single’s July release, a disgruntled Florence Ballard was let out of her Motown contract by an angry Berry Gordy and replaced with Cindy Birdsong, late of Patti LaBelle’s Bluebelles. The first public performance of the song was on an August 1967 episode of the variety series Hollywood Palace. It featured Cindy Birdsong singing in Florence Ballard’s usual spot.

Diana Ross left the group in 1970 for a successful solo career. The Supremes continued to perform, with Mary Wilson as the leader, until 1977. After that, splinter groups, like “Former Ladies of the Supremes” and “The Sounds of the Supremes,” emerged. These acts included some later replacement members of the group, as well as friends and relatives of those members. One incarnation featured Joyce Vincent, a one-time member of Tony Orlando and Dawn.