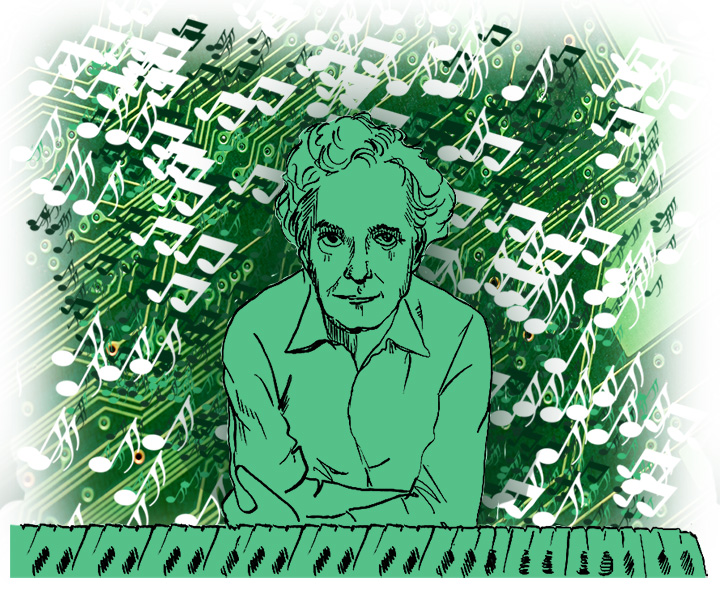 Forced by his parents to take piano lessons, Robert Moog preferred tinkering around in his father’s workshop. Robert’s father was an engineer at Consolidated Edison and Robert became fascinated by the wires and tubes and other electronic accessories. Around this time, Robert discovered the theremin, an unusual musical instrument that makes otherworldly sounds created merely by the wave of the hand. At the age of 14, Robert built his first theremin from plans in a magazine.

Robert pursued and achieved several degrees in electrical engineering, including a Ph.D from Cornell University.  Using technology he learned at school, Robert began building and selling theremins from his home. One of his customers, the celebrated experimental musician Raymond Scott, rewired Robert’s theremin to be controled by keyboard and, thus, invented the Clavivox, an early sound synthesizer.

While at Cornell, Robert worked diligently on sound modules for a synthesizer he was developing. Robert experimented, hoping to the reduce the size of current synthesizers, making them more portable and user-friendly. With the help and suggestions from experimental musicians like Wendy Carlos and Herb Deutsch, he premiered the Moog Synthesizer in the early 1960s. Robert explained that  “I don’t design stuff for myself. I’m a toolmaker. I design things that other people want to use.” Never satisfied to rest on his laurels, Robert continued to work on and refine his invention. His instrument soon became a staple of such noted musical acts as Emerson, Lake and Palmer, The Rolling Stones, Yes and The Grateful Dead.

Unfortunately, Robert was a poor businessman. He sold his company, Moog Music, to Norlin Musical Instruments (now part of Gibson Guitars), but remained with the company as a designer. However, had his contract not required him to stay for four years, he said he would have left sooner. Moog faced fierce completion from Roland and Arp, who built cheaper synthesizers.

In 1978, Robert moved to Asheville, North Carolina and opened Big Briar Music, eventually renaming the company Moog Music, after buying back the rights to the name. He became a research professor at the University of North Carolina while working on a synthesizer operated by touchscreen.

Robert passed away in 2005 at the age of 71. Without Robert Moog’s contributions, there would be no “electronic music” genre.