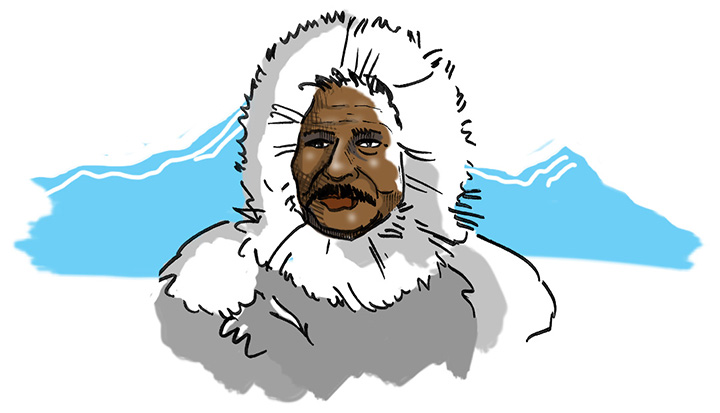 Born to sharecroppers in 1866, Matthew Henson fled persecution by the Ku Klux Klan and headed to Georgetown with his family. While attending an event honoring President Abraham Lincoln, young Matthew was inspired by a speech delivered by Frederick Douglass. Douglass called upon blacks to vigorously pursue educational opportunities and battle racial prejudice.

Matthew began working as a cabin boy aboard a merchant ship. The ship’s captain taught Matthew how to read and write. At 21, Matthew was working in a Washington, DC department store when he met Commander Robert E. Peary. When Peary learned of Matthew’s sailing experience, he recruited the young man to join his upcoming expedition to Nicaragua. Matthew accompanied Peary on explorations for the next twenty years – exclusively in the Arctic. Matthew became fluent in the Inuit language. He was an expert craftsman and dog sled driver and his resourcefulness was beneficial to his colleagues in the harsh Arctic conditions.

In 1909, Peary and his crew of over 40 men and women started out to reach the North Pole. As they came closer to the North Pole, Peary selected Matthew as part of a team of six to make the final run. An exhausted Peary could no longer continue on foot. He made the rest of the journey seated in a dog sled while Matthew was sent ahead as a scout. It was Matthew Henson who planted the American flag at the designated spot. However, in the years following, Robert Peary was lauded for the accomplishment, with Matthew largely forgotten. He spent the next thirty years on the staff of the U.S. Customs House in New York. It wasn’t until 1944 that Matthew (and other members of the Peary expedition) received proper acknowledgement with medals from Congress. Presidents Truman and Eisenhower both honored Matthew just prior to his death in 1955.