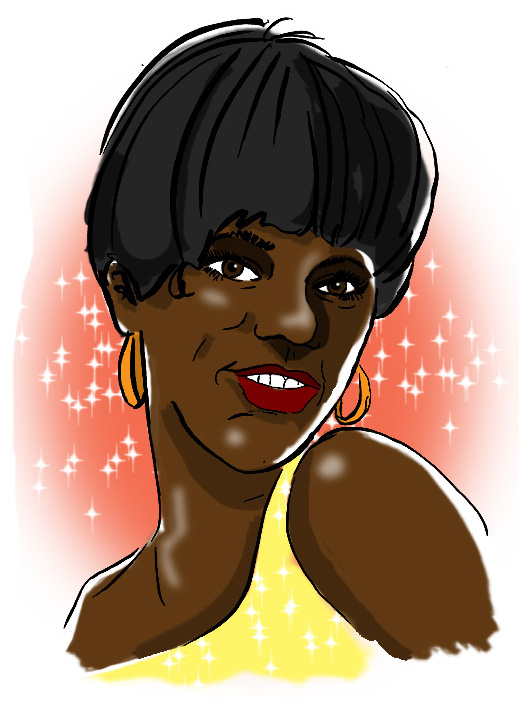 Born in Detroit, the ninth of fifteen children, Florence Ballard was introduced to music by her father. An auto worker by trade, he was an amateur musician and he taught his daughter to sing as he accompanied her on guitar. She and her high school friend Mary Wilson joined up with Betty McGlown and a petite young lady named Diana Ross, who preferred to be called “Diane.” They called themselves “The Primettes” and performed in around the Detroit area.In 1960, they auditioned for Berry Gordy’s Motown Records. Gordy advised the girls to graduate from high school before making an attempt at a singing career. All but Florence obliged.

Gordy wanted the group to change their name and, after numerous choices, Florence picked “The Supremes,” despite Diana Ross’s fear that they would be mistaken for a male singing group. The Supremes stuck, however they were derisively nicknamed “The No-Hit Supremes” as they released eight singles without ever charting. McGlown left the group before signing with Motown and the trio finally scored a hit in 1963’s “When the Love Light Starts Shining Through His Eyes.” Diana Ross became the official lead vocalist.

In 1964, The Supremes hit Number One for the first time with “Where Did Our Love Go.” Between ’64 and ’67, the group had ten Number One hits and sixteen Top Forty hits. At the height of The Supremes’ popularity, Florence became disillusioned and was unhappy with the musical direction the group was taking. She resented Ross and soon began to drink heavily to cope with her depression. She missed recording sessions, practices and even performances. Cindy Birdsong, a member of Patti Labelle’s Blue Belles, stood in for Florence on several occasions. One day after here 24th birthday, Florence showed up drunk for the evening’s performance at The Flamingo in Las Vegas. She was abruptly replaced by Birdsong. Soon after, Florence signed with ABC Records. As part of her settlement from her release from Motown, she was not permitted to promote her solo recordings as “a former member of The Supremes.” Both Wilson and Ross believed that a rape Florence suffered in 1960 played heavily on her persona, and although she presented a strong-willed personality, Florence was deeply troubled and fragile.

In 1968, Florence married Thomas Chapman and eventually gave birth to three daughters. Chapman, however, was physically abusive. The couple separated, but never divorced. With her solo career tanking, she unsuccessfully sued Motown for royalties owed. Facing poverty, she moved in with her sister. Mary Wilson invited Florence to rejoin The Supremes, now that Diana Ross had left for a very successful solo career. Florence joined to play tambourine, but told Wilson that she had no interest in singing anymore. Florence applied for welfare and entered a rehab program.

In 1975, after a five-year absense from the stage, Florence appeared with alt-rock band The Deadly Nightshade as part of a charity event. Jet Magazine reported that Florence was in a recovery program and was doing well. In early 1976, Florence entered Detroit’s Mt. Carmel Mercy Hospital complaining of numbness in her arms and legs. Late the same evening, she went into cardiac arrest and passed away. Florence was 32. She was posthumously inducted into the Rock and Roll Hall of Fame in 1988.