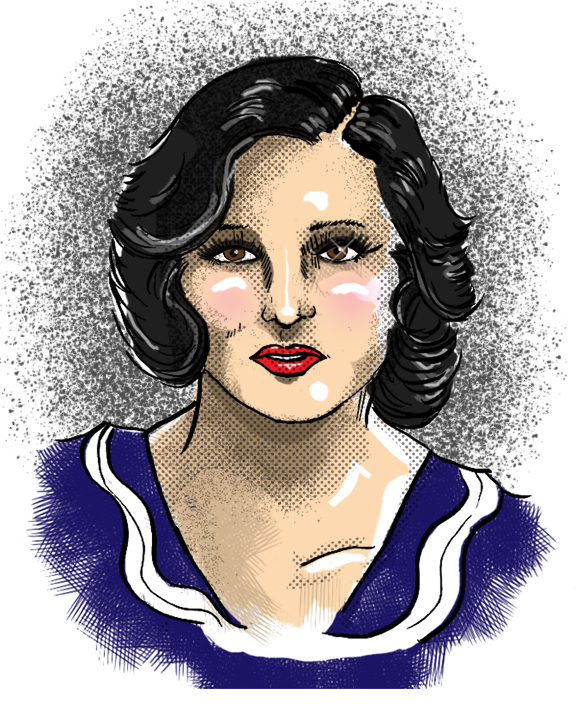 Corinne Griffith was regarded as one of the most beautiful actresses of the silent film era. A biographer’s research revealed that the phrase “the camera loves her” was coined for Corinne. She was praised by critics for her acting abilities, as well. She was nominated for an Academy Award for Best Actress in 1929. He had the opportunity of produce her own movies, a rarity among women in the early days of Hollywood. As the 20s became the 30s, Corinne’s’ career slowed and she decided to retire from the silver screen in 1932.

In her retirement, Corinne remained very active. She embarked on a new a career – writing. She was very prolific, releasing a number of fiction and non-fiction works. Her 1952 memoir Papa’s Delicate Condition was turned into a film starring Jackie Gleason and Glynis Johns in 1963. She also became active in the real estate market. She delivered speeches supporting her efforts to repeal the 16th Amendment to the Constitution.

After two brief marriages, Corinne married Washington Redskins owner George Preston Marshall in 1936. During her marriage, she wrote the lyrics to “Hail to the Redskins,” the Redskins’ fight song. Marshall passed away in 1958 and Corinne remarried a fourth time, this time to Broadway actor Danny Scholl, who was 25 years her junior.

Corinne’s marriage to Scholl lasted just two months before divorce proceedings began. During the divorce hearing, Corinne claimed that she was not Corinne at all. She claimed that Corinne had died and she was actually Corinne’s younger sister. She also denied that she had been previously married. When she was questioned about her true age, Corinne refused to comment, stating that her religion, Christian Science, prevented her from publicly disclosing it. Two actress acquaintances testified against Corinne’s claims, but she stuck by her story… initially. Until she changed it, explaining that she was Corinne’s twin sister, Mary. She insisted that Corinne had died in 1924 and was buried in an unmarked grave in Mexico.

In the wake of her wild claims, Corinne spent her final years writing in seclusion. She focused on non-fiction, including two collections of essays and an analytical book called Not for Men Only – but Almost, that detailed the appeal of sports to men, and its lack of appeal for most women.

Corinne suffered a stroke in 1979 and passed away in the summer at the age of 84. She left behind an estate worth in excess of 150 million dollars, making her one of the richest women of the time.