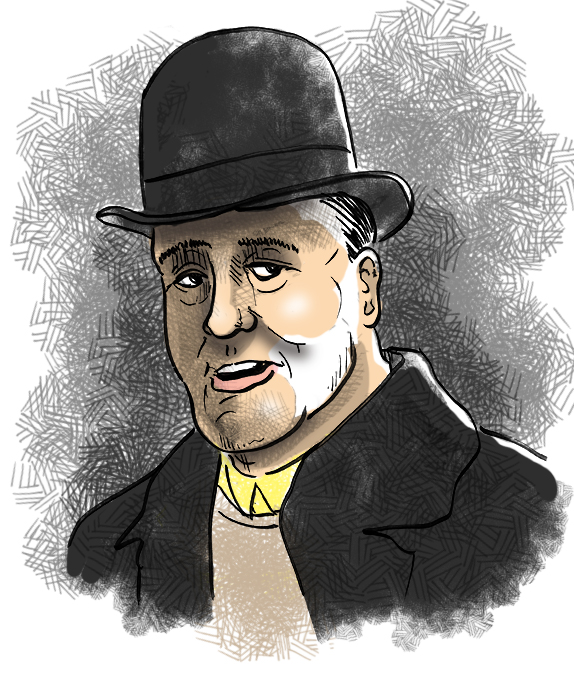 Eric Campbell was performing in local theater in Scotland when he was recruited by entertainment impresario Fred Karno. Karno was a slapstick comedian in his own right and is credited with popularizing the “pie-in-the-face” gag. Karno had assembled a roster of entertainers, including Charles Chaplin and Chaplin’s understudy Arthur Jefferson, later known by the stage name “Stan Laurel.”

Eric came to New York in 1914, immediately continuing his career on the stage. Two years later, he signed with Chaplin who was contracted to produce a dozen films for the Mutual Film Corporation. Eric went with Chaplin to Hollywood. In the spring of 1916, The Floorwalker was released to rave reviews. Eric played the overbearing foil to Chaplin’s endearing “Tramp” character. Eric would reprise this bullying persona in ten more films with Chaplin. He was even lent out to Mary Pickford to appear in Amarilly of Clothes-Line Alley, but fate would interfere.

Eric’s wife Fanny died suddenly while walking home from a Santa Monica restaurant. On her way to purchase a dress to wear to the funeral, Eric’s teenage daughter was stuck by a car and seriously injured.

At a late September 1917 party, Eric met Pearl Gilman, a second-rate comic actress with a reputation for gold-digging. She had married and divorced two wealthy men and now had her sights set on Eric Campbell. They were married just days after they met, however, less than two months after the wedding, Pearl filed for divorce, claiming abuse and Eric’s alleged d heavy drinking. He moved out of their shared home and took up residence near his friend Charles Chaplin. At a party to celebrate the completion of the film The Adventurer, Eric had too much to drink. He crashed his car in the early morning hours and was killed instantly. Eric was 37 years old.