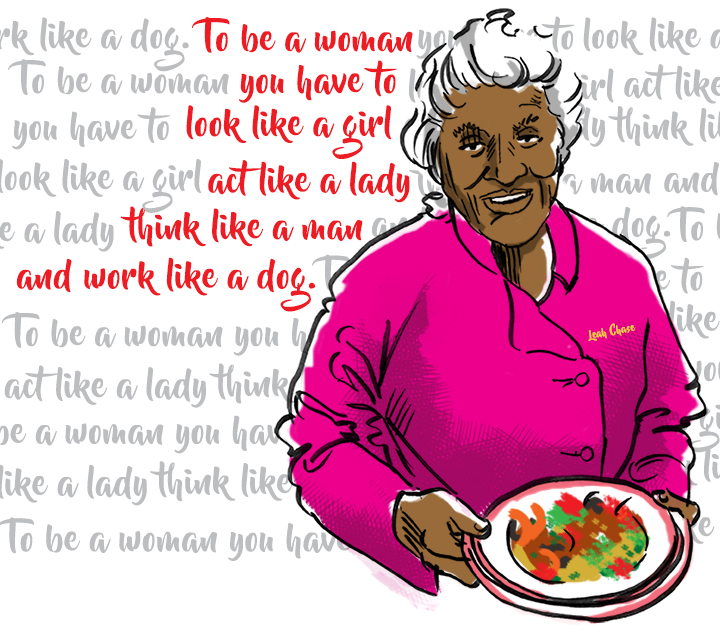 Leah Chase, the second of thirteen children, helped her family survive the Great Depression by cooking the okra, peas and greens that was grown in the family’s Madisonville, Louisiana garden. Leah and her siblings wore clothes made from rice and flour sacks, while he father worked his meager job at the Jahncke Shipyard. Wishing the children to attend Catholic school, the Chase family left Madisonville for New Orleans.

After high school, Leah worked for local bookies and then as a waitress at The Coffee Pot in the French Quarter (closed in February 2019 after 125 years). She earned one dollar a day as salary. In 1946, twenty-three year old Leah married local jazz trumpeter “Dooky” Chase. Dooky’s family owned a street corner stand in the Treme neighborhood, where they sold po-boy sandwiches and lottery tickets. Leah and Dooky took over the stand, converting it into a proper sit-down restaurant. Leah, a budding chef, changed the menu to reflect the Creole cooking she learned in her youth. She offered dishes previously available in “whites-only” establishments in New Orleans.

In the 1960s, under Leah Chase’s leadership, Dooky Chase’s Restaurant became a meeting place and sanctuary for the civil rights movement. It became became one of the only public places in New Orleans where African Americans could meet and discuss strategies. Leah and her husband would host black voter registration campaign organizers, the NAACP, black political meetings and many other civil leaders at their restaurant, including local civil rights leaders and later Martin Luther King Jr. and the Freedom Riders. Leah provided another service to the African American community. With no banks willing to accept African American customers, Leah would cash checks for patrons they knew.

Dooky Chase’s Restaurant was a staple for New Orleans cuisine for years, welcoming presidents, dignitaries and celebrities. In 2005, however, the restaurant suffered major damage as a result of Hurricane Katrina. In the aftermath, the New Orleans restaurant association held a a fundraiser for Dooky Chase’s. A check for $40,000 was presented to a grateful and humbled Leah Chase. The restaurant was re-opened, but for limited hours. Although she was 82, Leah remained active in the restaurant’s kitchen, overseeing the day-to-day operations and happily meeting with customers.

In 2009, Disney used Leah Chase as inspiration for “Tiana,” the main character in the animated film The Princess and the Frog. In a 2012 revival of Tennessee Williams‘ New Orleans set play A Streetcar Named Desire, a reference to a local restaurant was changed to Dooky Chase’s.