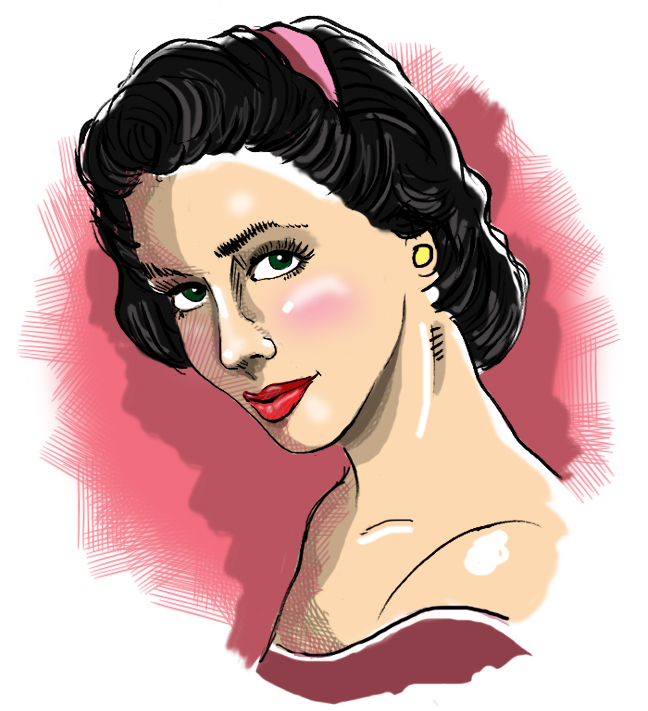 Myrna Fahey was a former cheerleader and beauty pageant winner. However, she refused to coast along on her good looks alone. She was an avid skier and stock investor, insisting that her dressing rooms be equipped with a stock ticker.

Myrna appeared in numerous episodes of TV Westerns, including Gunsmoke, Maverick and Wagon Train. After an episode of Bonanza, the cast presented the feisty Myrna with a tongue-in-cheek “Best Slapper in a Filmed Series” award. Myrna branched out with roles in Perry Mason and Hawaiian Eye, even trying her hand at comedy in Bachelor Father and camp in the popular Batman series. She was not content with the “good girl” roles she was offered. She landed the role of “Madeline Usher” alongside Vincent Price in Roger Corman’s take on the Edgar Allan Poe classic The Fall of the House of Usher.

In 1961, Myrna took a starring role in the TV series Father of the Bride, based on the acclaimed film of the same name. She was cast based solely on her striking resemblance to Elizabeth Taylor, a comparison that Myrna found distasteful, revealing to one interviewer “the fact that I’m supposed to look like Elizabeth Whats-Her-Name had nothing to do with my getting [the part], because we don’t really look alike I don’t think.” Myrna fought to be released from her contract with the show, citing that too much emphasis was put on the “father” character and not enough on her “bride” character. the series lasted one season.

In 1964, Myrna began dating Yankees star Joe DiMaggio. She also began receiving death threats. An FBI investigation determined the threats came from a patient at a mental hospital in San Jose, California. Apparently the patient could not bear to see DiMaggio with anyone other than Marilyn Monroe, who died in 1962.

In the early 1970s, Myrna slowed down her workload, as she was diagnosed with cancer. She appeared in one episode of the medical drama Marcus Welby MD and played a beauty pageant chaperone in the TV movie The Great American Beauty Contest. It would prove to be her final role. Myrna lost her battle with cancer on May 6, 1973 at the age of 40.