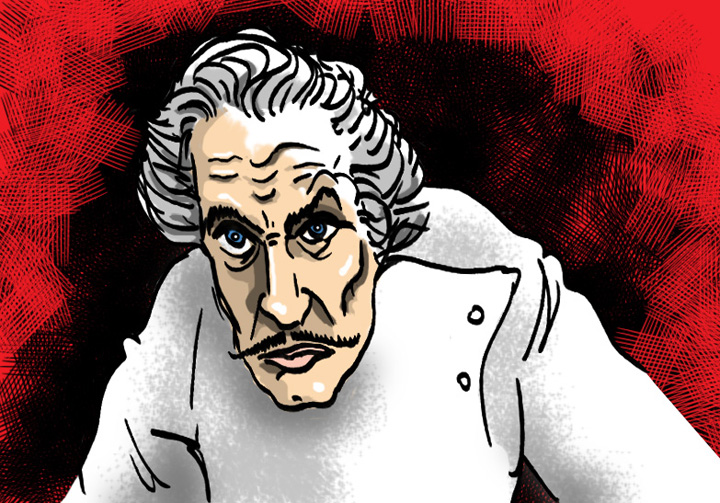 Can you imagine my joy when, in 1975, I brought home a newly-released copy of Alice Cooper’s Welcome to My Nightmare album, popped it onto my turntable and heard a deliciously creepy introduction by none other than the “King of Modern Macabre” — Vincent Price? It was (if I may borrow a word not particularly popular in 1975) awesome! I was a fan of both Alice Cooper, having been mesmerized by School’s Out and Billion Dollar Babies years before, and Vincent Price, whose over-the-top mix of camp and horror was regularly offered at Saturday afternoon matinees. Plus, Mr. Price appeared as the villainous Egghead in a two-episode arc on my favorite childhood TV show Batman. And now, here were these two show-biz heavyweights joining forces for my personal entertainment.

I saw Alice Cooper on the Philadelphia stop of the subsequent Welcome to My Nightmare tour. When the Vincent Price intro to “Black Widow” blared from the speakers, as six-foot tall spiders pirouetted across the stage with a top-hatted Mr. Cooper, it was more that my 14-year old senses could take.

Seven years later, little Michael Jackson — all grown up and no longer the novelty frontman of a family pop band — released his epic masterpiece Thriller, an album that would go on to sell an estimated 51 million copies worldwide. And right there, in the middle of the title track, a spooky homage to the horror genre, was Vincent Price delivering a suitably chilling recitation (a “rap,” if you will) in his malevolent, yet cultured, voice.

Then, in what would be his final film role, Vincent Price once again lit up the screen in a cameo as the creator of the titular character in Edward Scissorhands. Looking genial in a dark smoking jacket, his white hair combed back in a dignified manner, Vincent imparted the secrets of etiquette and grace to a silent and naive (and unfinished) Johnny Depp. His performance was delightful — a perfect cap to a memorable career.

In March, I met Vincent’s daughter, Victoria. We are approximately the same age, just a few months apart. As I spoke with Victoria, my mind slipped back to my youth. I was that 14-year-old listening to that Alice Cooper album. I remembered how cool it was for me. I can only image how cool it was for Victoria.

This is Post Number 1000 on the josh pincus is crying blog.