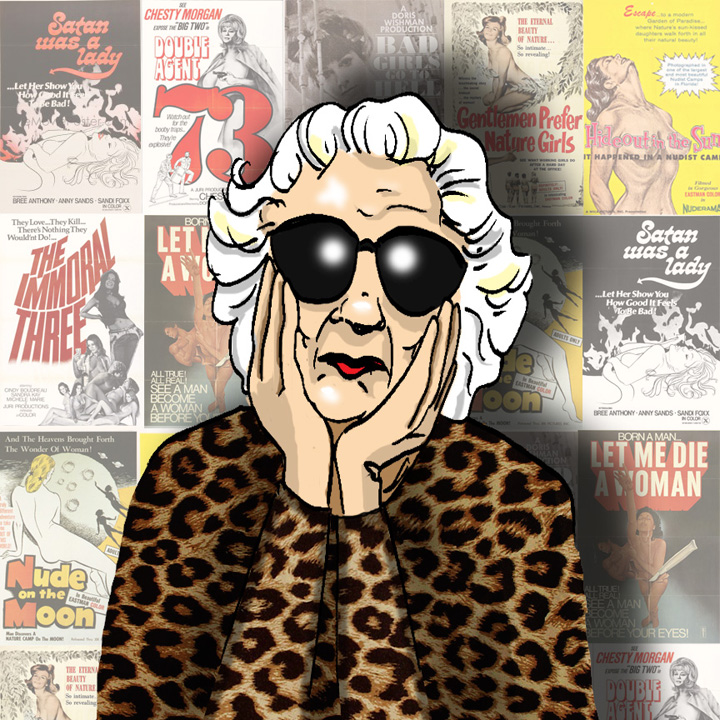 Doris Wishman was bored. As a recent widow, she refused to sit home and spend the rest of her life grieving. So she decided to make movies.

Doris, a New York native, skirted recently-passed nudity legislation. The new law permitted nudity in film in a documentary context. Doris borrowed $10,000 from her sister and produced and directed Hideout in the Sun, a blatant “nudie” film in the guise of a documentary. Acting as a modern-day Susan B. Anthony, Doris breached the all-male world of nudist film-making, releasing at least one film per year. She tried to disguise her efforts, first as “naturalist” films, then as “science-fiction” when she made Nude on the Moon in 1960. She knew nudity in film was a sure money maker, and despite a New York State ban, Doris was pretty successful.

In the middle 60s, Doris jumped on the sexplotation bandwagon. She produced low-budget, black & white shockers like Bad Girls Go to Hell and The Immoral Three. She made two films with cult actress Lillian Stello, professionally known as “Chesty Morgan.” Both films were played strictly for campy laughs and took full comedic advantage of Miss Morgan’s notorious 73 inch bust line. Doris gained respect and was considered a peer of genre heavyweights like Russ Meyer.

In the 70s, Doris became intrigued by a new trend — slasher films. Inspired by John Carpenter’s groundbreaking Halloween and Sean S. Cunningham’s Friday the 13th, Doris produced and directed A Night to Dismember in 1983. It was a bomb.

Doris left the movie business and took a job in a lingerie store in Coral Gables, Florida. Public praise and admiration from cult film maker John Waters and critic Joe Bob Briggs sparked new interest in Doris’s motion pictures. She made a final film,  Each Time I Kill  while she battled lymphoma. Doris passed away in the summer of 2002 at the age of 90.

In 2007, the Philadelphia International Gay & Lesbian Film Festival featured Each Time I Kill as part of its two-week program. Event organizers mistakenly believed the film included a lesbian story line.