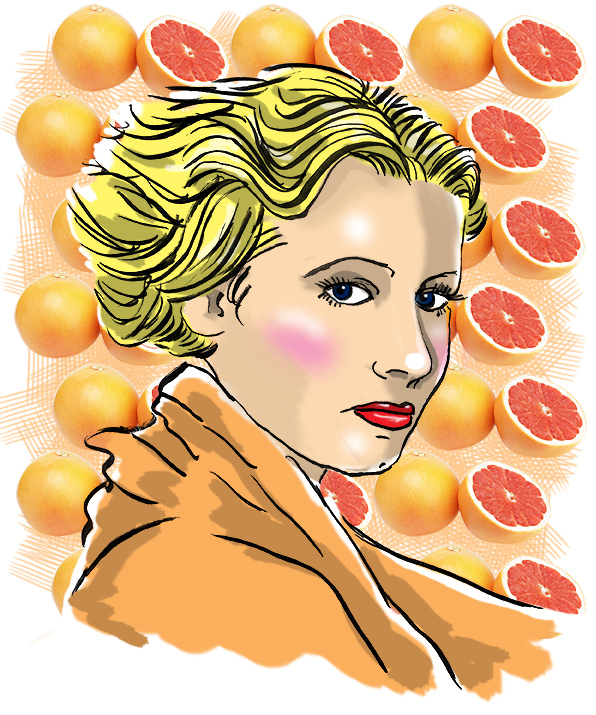 Philadelphia native Virginia Klotz moved to New York City to pursue her dream of acting. She got work as a dancer while she was the roommate of future Hollywood siren Barbara Stanwyck. Virginia, now using the stage name “Mae Clarke,” signed on with Universal Pictures and was immediately cast in some big films, all in 1931. She was featured in the first filmed version of The Front Page, a story that would be remade for decades to come. She costarred in Frankenstein, Universal’s first foray into the lucrative horror genre. Mae played Dr. Frankenstein’s fiancee Elizabeth, who is terrorized by the monster on her wedding day. Later in the year, she played the memorable, though uncredited, role of Kitty, James Cagney’s girlfriend in The Public Enemy, in which she famously receives a grapefruit half to the face at the hand of Cagney. In the film, Cagney promptly dumps Mae in favor of Jean Harlow. The Public Enemy was so popular, it ran 24 hours a day in a Times Square theater. Mae’s ex-husband had the grapefruit scene timed so perfectly that he would frequently buy a ticket, enter the theater to again enjoy that sequence, then immediately leave the theater.

Although she continued to get work, Mae was no longer considered a leading lady by the mid-1930s. She was relegated to small roles in films through the rest of her career. She managed to get a starring role in the late 40s, although it was a low-budget 12-chapter science-fiction serial for Republic Pictures. Later, Mae found work on television in shows like Perry Mason, Batman and General Hospital.

In her later years, Mae was known to attend horror film conventions, where she enjoyed meeting Frankenstein fans. She passed away in 1992 at the age of 81.