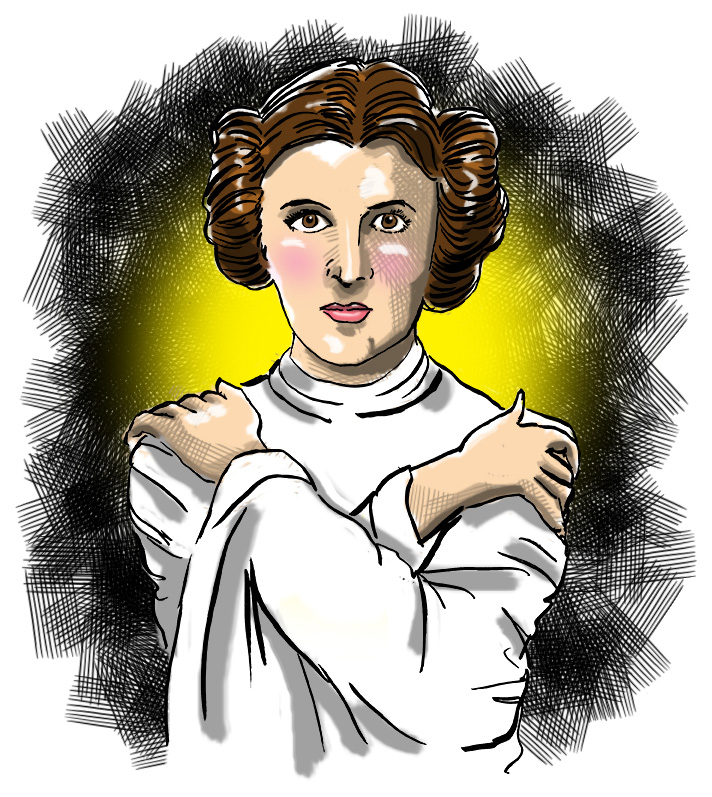 I met Carrie Fisher a few years ago at a horror and science-fiction convention in Cherry Hill, New Jersey. It’s a convention that I have attended on-and-off over the past fifteen years. While I am amused by the various costumed attendees and the unusual items of memorabilia on display, I mostly go to add to my ever-increasing collection of celebrity autographed photos. As in past years, I met up with my friend and fellow artist Matt and we scanned the list of celebrities at this semi-annual event. Most of the celebrities are gathered together, seated at long tables around the perimeter of one large room. Sometimes a celebrity of a “higher caliber” is sequestered in a private room, usually on an upper floor of the host hotel. This was the case for the special guest at this particular convention. I’m speaking, of course, about Carrie Fisher. Carrie was up one flight of stairs from the main lobby. In a room all to herself… and her fans.

Now, I am not presently, nor have I ever been a fan of the Star Wars film franchise that made Ms. Fisher a star. Nor am I a fan of The Blues Brothers or The ‘Burbs or The Man with One Red Shoe. I never saw When Harry Met Sally and Under The Rainbow was easily one of the worst movies ever made. But, I recognize Carrie Fisher’s impact and status in the entertainment industry. She is an accomplished author and stage actress, as well as a respected script doctor, where her uncredited efforts have salvaged the screenplays of such successful films as Outbreak, The Wedding Singer, Hook, Lethal Weapon 3 and Sister Act, among others.

Matt, nearly ten years my junior, is, however, a Star Wars fan. He wanted a photo of “Princess Leia” autographed by the iconic actress that played her. As a good friend, I went along for the ride but I would pass on an autograph for myself. We ascended the stairs and found the room with a computer-printed sign that read “CARRIE FISHER” taped to the opened door. We entered and joined the fairly lengthy queue line. We looked around the room as we waited for Matt’s turn. As veteran attendees, we know that celebrities travel with an entourage or “handlers” – assistants who unobtrusively accept the payment for the signed items and keep the lines orderly. At the front of the room was a long table covered with glossy photos featuring a fresh, young Carrie Fisher in a variety of poses from the various films in which she appeared. Most were from Star Wars, although there was the occasional, nondescript head shot mingled among the costumed ones. Seated behind the table were two young women and an older woman. I squinted and Matt craned his neck as we both tried to spot Ms. Fisher.

“I guess she’s on a break right now.” I finally said, after surveying the room and concluding that Carrie Fisher was no where to be seen.

However, the line was indeed moving, as though someone was signing pictures for satisfied fans. I looked again. The older woman was hunched over the table smiling and gabbing and scribbling on pictures with a big, black Sharpie.

“Oh my gosh!” I gasped and elbowed Matt, “That’s her! That old lady is Carrie Fisher!”

We were floored. She was totally unrecognizable as the one-time ruler of Alderaan, member of the Imperial Senate and agent of the Rebel Alliance. She was some crazy lady who was cackling hysterically as she tossed handfuls of glitter at the folks waiting for a signature. A small dog, snug in a paper bag, was seated on a chair to her immediate left. 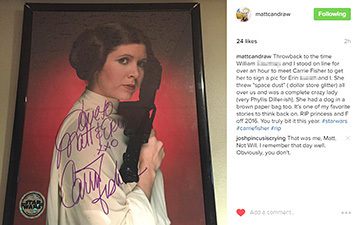 Matt had a slightly different memory of that day, until I reminded him. Click to enlarge

When it was Matt’s turn, she asked him if he’d like some glitter (“space dust” she called it) and tossed a fistful in the air before receiving an answer. I stood a few steps back, but it didn’t stop her from offering me some glitter, as well… which I politely declined. She didn’t care that I did not want an autograph. She did smile at me, though, and signed a picture for Matt. Matt gave a few words of praise (along with sixty dollars) to the actress and she accepted them with sincere gratitude. We slowly exited the room, looking back to see Carrie throwing more glitter and laughing like a giddy eight year-old.

Carrie Fisher passed away today, never regaining consciousness after an earlier heart attack. She was 60 years old. I watched a few recent interviews with her and I realized that what I assumed were the actions of a crazy person were, in fact, just Carrie having a good time. I think she was well aware of what she was doing and well aware of her place in life. She was happy and living for the moment. She lived a life filled with ups and downs, pleasure and heartache, fame and obscurity, success and failure. And she was finally able to accept it all.

However, she had a lot more of life she wanted to accept.