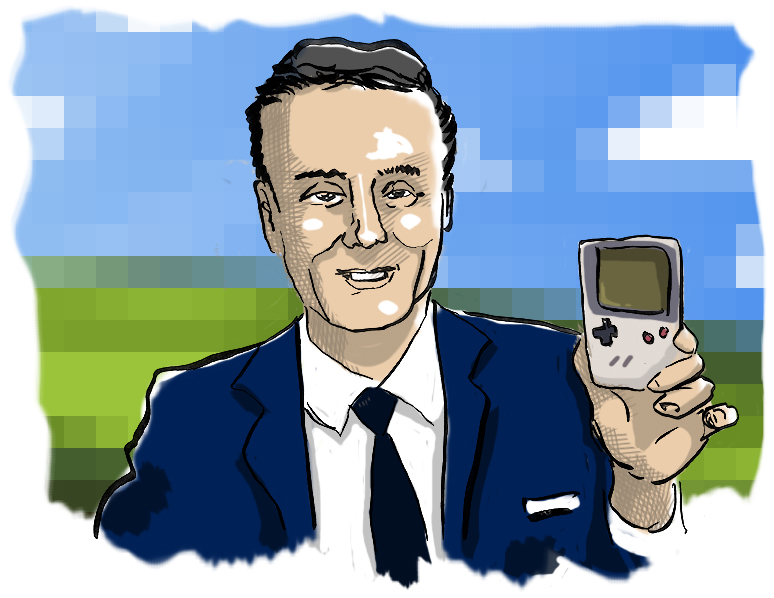 Upon his graduation from college, Gunpei Yokoi was hired as a maintenance man at the Nintendo Corporation. His job was to maintain the machinery on the assembly line that produced the company’s main product, Hanafuda cards, a deck of playing cards used for various games. In 1966, after a year in his position, Hiroshi Yamauchi, the president of Nintendo noticed Gunpei tinkering with an automated robot hand that he created in his spare time. Yamauchi loved the device and ordered Gunpei to develop it as a toy. Gunpei’s invention, dubbed the Ultra hand was a huge success for the Christmas rush. Gunpei pioneered Nintendo’s new toy division and created a series of popular products.

In 1974, Nintendo began making video games. On a business trip, Gunpei observed a bored traveler playing with a pocket calculator. Inspired, he developed a small watch that played video games. It became the Game & Watch and Nintendo marketed the piece to great success in 1980. The next year, Gunpei was appointed supervisor of the Donkey Kong video game development. Base on its success, he worked on the Mario Bros. game and introduced the “multi-player” concept.

Gunpei’s next project for Nintendo was Game Boy. It became an international success.

In 1985, Massachusetts-based Reflection Technology, Inc. presented its 3D video game technology to rival game developer Sega. Sega declined the offer, but Nintendo expressed interest. They put Gunpei in charge of development and production. The result of Gunpei’s efforts was Virtual Boy. Virtual Boy was rolled out in 1995 and discontinued less than six months later. High sales predictions were never met and consumer interest was nearly non-existent. Concern was expressed that extended use of Virtual Boy could lead to vision problems. Instead, Nintendo turned its focus to the N64 console in Virtual Boy’s wake. Gunpei was disappointed, but soldiered on. He developed the Game Boy Pocket, a smaller and lighter version of the original Game Boy. Then, after 31 years with Nintendo, Gunpei left to pursue his own company.

In 1997, just a year after leaving Nintendo, Gunpei was involved in a traffic accident. He rear-ended a truck with his car. When he and the other driver got out of their vehicles to assess the damage, Gunpei was struck and killed by two passing cars. He was 56 years old.