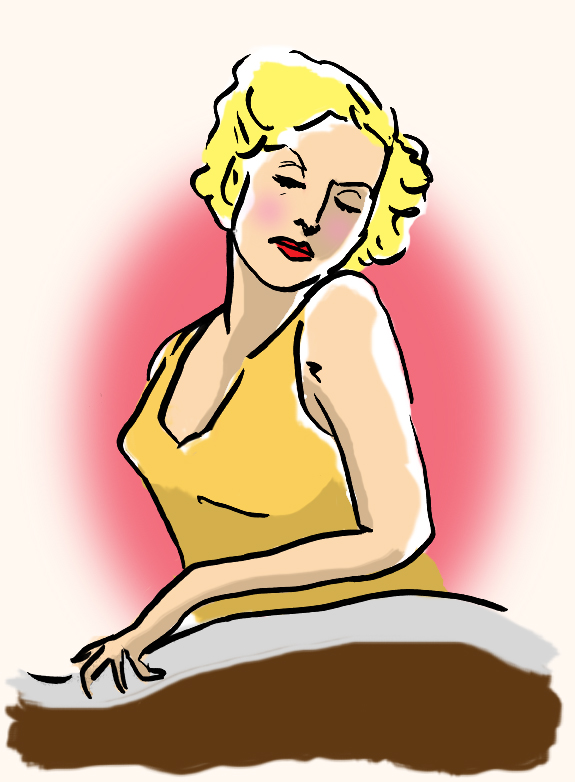 While appearing in a high school production, young Thalia Dickerson was spotted by a talent scout from Warner Brothers Studios. She was signed to a contract and made her debut with the stage name “Gloria Dickson” in 1937’s They Won’t Forget, a fictionalized account of the events surrounding the murder of 13-year-old Mary Phagan. The film was also the debut of another young actress named Lana Turner. The film was a hit and studio head Jack Warner proclaimed Gloria as his new “Star on the Rise.”

On her first day at Warner’s, Gloria met make-up man Perc Westmore. Perc introduced Gloria to what would become one of her favorite pastimes — drinking. Soon, Gloria married Perc and he suggested (or insisted) that Gloria get a nose job. Under her husband’s (and alcohol’s) influence, she became unreliable on film sets and her career began to suffer. Although he made many career demands, Perc was also a womanizer and the marriage was over in three years.

Gloria was eventually relegated to B-movies, despite one-time roles alongside John Garfield and Claude Rains. She landed a part in Barbara Stanwyck’s Lady of Burlesque, a murder-mystery penned by stripper Gypsy Rose Lee, hoping it would jumpstart her slumping career. It didn’t, and acting jobs came fewer and far between.

After another brief marriage to her I Want a Divorce director Ralph Murphy (another adulterer), Gloria married former boxer (and Jean Harlow bodyguard) Bill Fitzgerald. The couple moved into the former Hollywood residence of Stanley Toler (best remembered as the silver screen’s Charlie Chan). The house was an odd structure, with small, second-floor windows set high on the walls.

On April 10, 1945, Gloria was dozing in the living room and decided to head upstairs for an afternoon nap. Around 2 PM, a neighbor detected the smell of burning leaves. A few hours later, the smell persisted and other neighbors spotted flames shooting from the roof of Gloria’s house. Five fire departments were summoned at the home. Gloria’s husband Bill arrived home, screaming, “My baby’s in there! I have to save my baby!” Fire official prevented him from entering the burning building. Later, Gloria’s body was discovered, face down, in a second floor bathroom. An examination revealed that her lungs had been seared and she succumbed to smoke inhalation, as well as suffering first and second-degree burns. He pet dog’s body was found next to her. The fire was caused by a smoldering cigarette that Gloria had left on a chair in the living room. It was further surmised that she was unable to access the small, awkwardly placed, second floor windows in an attempt to climb out to safety. Gloria was 27 years old. Her widower had her grave marker inscribed “My Baby.”

Five years later, Bill Fitzgerald remarried. He was arrested within a month of his marriage for passing bad checks on his new bride’s bank account. The last check was written to a hotel that was a known front for prostitution. He was sentenced to five years in prison, during which he died, at 47, of complications of venereal disease. His unclaimed body was buried in the communal prison cemetery.