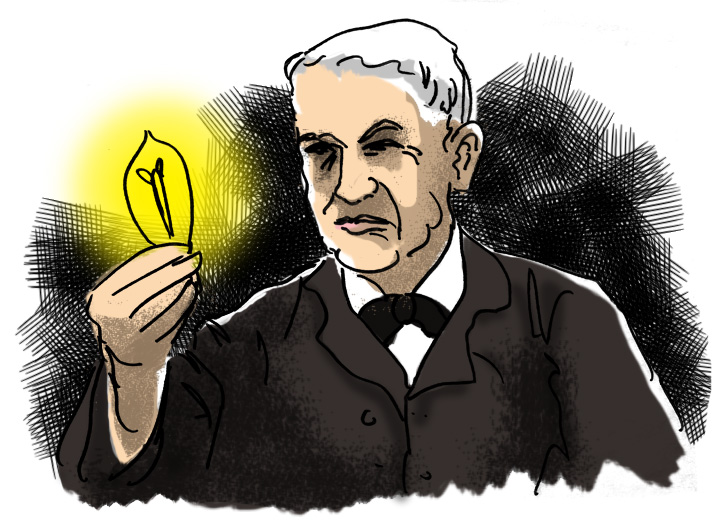 Thomas Edison is a beloved figure in the history of science, technology and invention.

In 1882, Nikola Tesla emigrated to the United States to work for Edison. An innovative electrical engineer in his native Serbia, he was hired to redesign Edison’s inefficient motor. At the time, Tesla was paid a salary of $18 dollars per week, but Edison promised a bonus of $50,000 if Tesla could improve the motor. In a few months, Tesla easily completed the task. Edison refused to pay, instead he laughed at Tesla and told him, “If you were an American, you would understand the American sense of humor.” As a consolation, he offered to increase Tesla’s pay to $25 per week. An outraged Tesla quit and went off on his own, eventually partnering with George Westinghouse.

While Tesla was Edison’s employee, Edison regularly mocked and belittled Tesla’s achievements, calling them “impractical.” Edison then took credit for an early X-Ray machine that Tesla had been working on under Edison’s employ.

Edison fought vehemently against Tesla’s innovative AC (alternate current) power, instead championing his own DC (direct current) power. Edison spoke publicly about the dangers of AC, going so far as to publicly electrocuting animals, including an elephant, to make his point. Edison commissioned an electric chair to be built using Tesla’s AC power. An inmate on death row was executed in a very messy spectacle in an effort to prove Tesla’s findings dangerous. (AC power is no more dangerous than DC. High voltage normally means high current. It doesn’t matter what version of voltage it is.)

Later in life, Tesla was recognized for his contributions. He was awarded a medal from The American Institute of Electrical Engineers (AIEE) — The Edison Medal.

Edison wasn’t content on screwing over Nikola Tesla. In 1902, when French filmmaker Georges Méliès released his groundbreaking Le Voyage dans la Lune (A Trip to the Moon), Edison essentially bootlegged the film and distributed it in the United States, to tremendous profit. He shared none of that profit with the director.

And he didn’t stop there. A man named Bradley Pelsgraf invented a shoe cleaning device. Edison, frustrated that he did not have a competing device, took several of Pelsgraf’s inventions and dropped them off a tall building’s roof to show that their heavy weight could be dangerous. He killed three people in the process.

Thomas Edison’s last breath is reportedly captured in a test tube housed at the Henry Ford Museum in Detroit. It smells like a cheater.