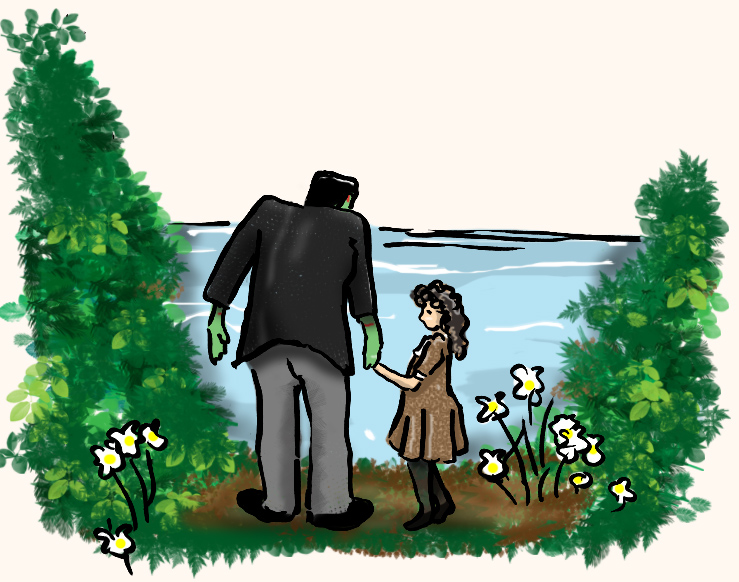 Universal Pictures classic Frankenstein frightened audiences when it was released in 1931. One scene in particular horrified viewers so much that it was removed from early versions of the film and not restored until home video releases in 1980, nearly fifty years later. The infamous scene featured Dr. Frankenstein’s hulking, fearsome creature stumbling through the woods and finding little Maria playing by a lake. Unfazed, the young girl asks the creature to join her. She shows him how to make “a boat” by popping the flower from the top of a daisy and flicking it into the water, where it floats on the lake’s surface. When the supply of daisies is exhausted, the innocent monster with the abnormal brain, does the unthinkable. He grabs the child and hurls her into the lake, expecting her to mimic the floating flowers. She doesn’t. Instead, she flails her arms about creating wild splashes, until she stops – drowned. The confused and disappointed monster wanders off to wreak more havoc. The next scene shows Maria’s father marching through the town carrying the lifeless body of his daughter in his outstretched arms.  The outraged townspeople form a mob, complete with the requisite torches and pitchforks, and begin a search for the notorious doctor’s brute.

The girl was played by six-year old Marilyn Harris, a veteran of an uncredited role in an early John Wayne Western called The Big Trail.  When it came time to shoot the “lake” scene, Frankenstein director James Whale was concerned that little Marilyn would be frightened by actor Boris Karloff in costume as the monster. When the cast and crew assembled at the studio to drive out to the shoot location, Marilyn bounded out of her car and ran right up to Karloff, who was in full costume and makeup. She grabbed his hand and asked, “May I ride with you?”  Karloff smiled and replied, “Would you, darling?” The two got along like old friends on the set.

The scene required several takes until director Whale was satisfied. Marilyn was tossed into the water over and over again. Despite being a good swimmer, Marilyn was growing tired. Whale offered Marilyn a special treat — her favorite snack, hard-boiled eggs — if they could complete just one more take. She agreed and Whale was so pleased with the results, he presented her with two dozen eggs.

Marilyn appeared in a slew of uncredited roles for the next ten or so years, deciding to call it a career at the age of nineteen. She worked as a cashier at the famed Hollywood Palladium on Sunset Boulevard. It was there she met her husband. After marrying, Marilyn retired to the domestic life to raise a family.

With fond memories of Boris Karloff and her brief Hollywood life, Marilyn passed away from cancer at the age of 75.