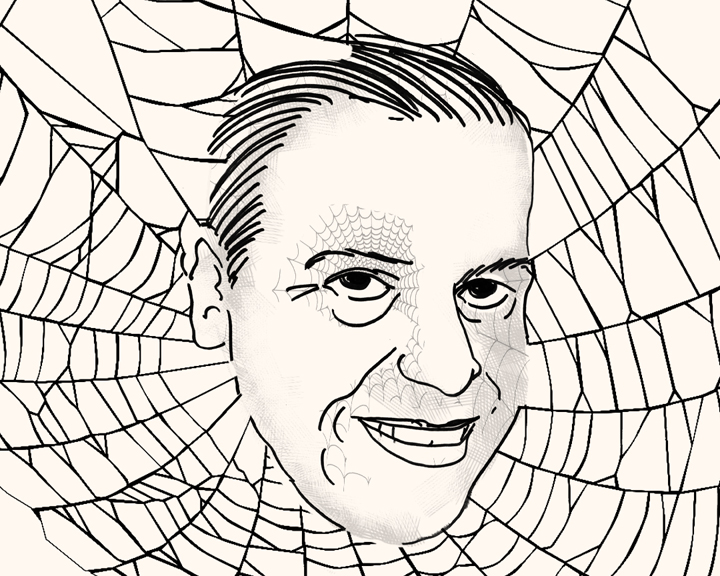 “Oh, what a tangled web we weave
When first we practise to deceive!”
— Marmion by Sir Walter Scott

My dad was a liar. And not a very good one.

In the long ago days before the internet, when facts were a little tougher to confirm, my dad made up shit left and right. He loved to tell of how he cut school as a child and sneaked off to a Phillies game. He claimed he witnessed a no-hitter, but couldn’t tell anyone because he’d get into hot water for skipping school. He loved telling that story. Years later, after a minimal amount of “Googling,” I discovered that the entire tale was fabricated.

By trade, my father was a butcher. He was employed by a local supermarket chain for many years, until he worked himself up to the corporate level. A suit and tie replaced his bloody apron as his regular work attire. At this new level, he was rubbing elbows with (in his eyes) the “upper crust” and was entitled to be included among the attendees of an annual corporate executive convention and banquet. My mother, at the time, established herself a little business of transporting neighborhood children to kindergarten at the nearby elementary school. For a mere three dollars per week, she’d stuff twenty toddlers into the open space of her station wagon and — seat belts be damned! — deliver them to their preschool. A little jostled and shaken-up, but relatively safe. My father, however, had told his colleagues that his wife was otherwise employed. He had told them that she was a teacher. But, he did not corroborate his deception with my mom. She was not embarrassed by how she earned her pay. (She was proud, as a matter of fact!) So, while mingling at a pre-dinner cocktail hour, my mom was confused when my dad’s boss asked what subject she taught. With a look of momentary bewilderment, she corrected the man, explaining that she was not a teacher. My dad was livid, despite not briefing my mom on the bullshit he’d been shoveling at the office for the past eleven months.

When my son was born, my wife and I continued the Jewish tradition of honoring a deceased family member by naming a newborn in their memory. My son would be carrying on the symbolic names of my wife’s beloved grandfather and my beloved maternal grandmother. The official naming was done at the brit milah (circumcision ceremony). During the proceeding, the mohel (one who performs a circumcision) announced our child’s Hebrew name to the small congregation gathered in our home. My father’s mother leaned in to my dad and asked who our baby was being named for. Then she asked who my older brother was named for. My dad replied, “Max (my brother) was named for Pop (meaning my father’s father).” This, of course, was not true. My paternal grandfather was still fourteen years from meeting the Grim Reaper when my brother was born. Jews just don’t that and my father knew it. He also knew he was lying to his elderly mother.

My father became very sick very suddenly in October 1993. Actually, he was sick for a long time, he just didn’t let anyone know — so, it was sudden for the family. My father was keeping company with a very nice woman who filled the void in his life left by my mother’s passing two years earlier. As my father drifted in and out of consciousness in a hospital bed, my immediate family — my brother Max, my wife and myself — entertained my dad’s lady friend’s future plans. With sparkly eyes, she spoke of arrangements and promises that my father made — how they would marry in the new year, how she would move in with him. She continued to explain that my father justified the enormous amount of money still owed on a thirty year-old house was due to a second and third mortgage being obtained in order to pay for my art school education.

“Whoa!,” I interrupted before another word was uttered, “I paid for art school. Me! No one else!”

We all stared at each other across the little semi-circle we had formed in the hospital hallway. “What else did he tell you?,” Max asked. She had been told by my father that he was a partner in the current supermarket in which he was employed (he wasn’t). The place had just experienced a devastating fire and he was concerned about the cost of rebuilding (it was not remotely a concern of his).

We were dumbfounded. After 36 years of lying to my mother, my dad had the opportunity to make a fresh start in a relationship. Instead, he chose to continue on the path that he was used to.

I love and miss my father. He taught me a lot, but he had no idea how he was teaching me.

It looks like Illustration Friday suggested the word “entangled” in 2009. Here is my submission from that time.