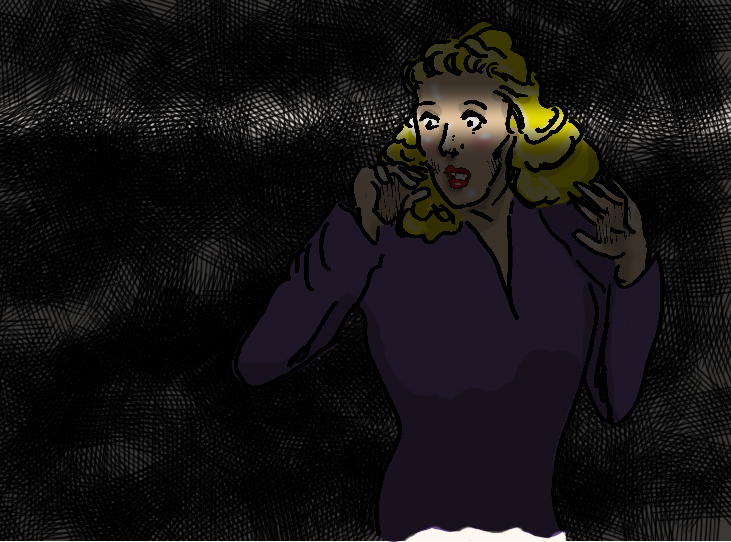 Evelyn Ankers was born in Chile to British parents. Once her family moved back to  England, young Evelyn was bitten by the acting bug. She took in small parts in British films, including The Bells of St. Mary’s with Laurence Olivier and Vivien Leigh in 1937.

Evelyn left England at the start of World War II. She headed for Hollywood and signed a contract with Universal Pictures.  She made her Universal debut alongside Abbott and Costello in the 1941 horror comedy Hold That Ghost. Later in ’41, she starred as Gwen Conliffe, the role for which she is most remembered,  in the classic The Wolf Man with Lon Chaney Jr.  Evelyn went on to make seven more films with Chaney, although their relationship was less than amiable. She once commented, “He’s the sweetest man in the world… when he isn’t drinking.”

Earning the nickname “Queen of the Screamers”, Evelyn found herself banished to “Horror Movie Hell.” She continually played the role of the classy society woman terrorized by the title monster in many films… and she kept it up for nearly 15 years. She has the dubious distinction of being the only actress to appear in a Wolf Man, a Dracula and a Frankenstein feature.

In 1950, Evelyn retired from the screen to live the domestic life of a housewife to her spouse, actor Richard Denning (best known for his role as Lucille Ball’s husband on the radio comedy My Favorite Husband – the forerunner to I Love Lucy). She came out of retirement in 1960 to star opposite Denning in her final film, No Greater Love.

Evelyn passed away in 1985, succumbing to ovarian cancer. She died just two weeks after her 67th birthday.