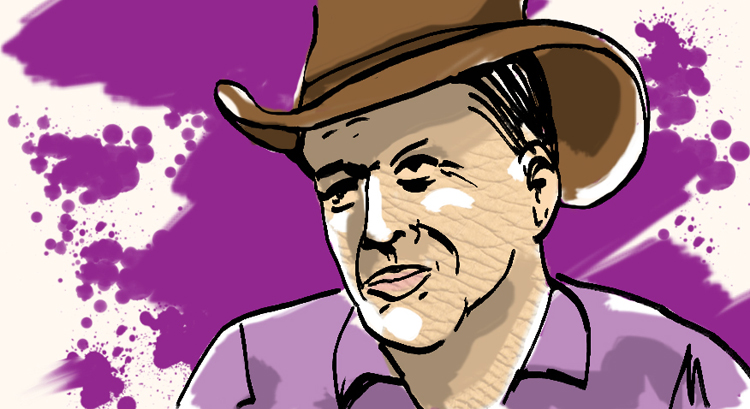 Sheb Wooley was the real deal – born in Oklahoma on a ranch; grew up as a cowboy; became a rodeo star and formed a country & Western band. In the 1950s, Sheb moved to Hollywood and starred in dozens of Westerns, including High Noon, Giant and The Outlaw Josie Wales. On television, he appeared in The Adventures of Kit Carson, The Ranger Rider and the long-running series Rawhide with Eric Fleming and a young Clint Eastwood.

In the 1940s, Sheb took an interest in the budding career of his wife’s young cousin, Roger Miller. He taught the boy guitar chords and even bought him a fiddle and taught him how to play. Roger went on to become a renowned singer-songwriter, famous for his compositions “King of the Road” and “Dang Me,” and his Tony-winning score for the Broadway hit Big River. Roger won a record 11 Grammys, a feat eventually topped years later by Michael Jackson.

In 1958, while still maintaining an active acting career,  Sheb topped the Billboard charts with his self-penned novelty hit, “Purple People Eater,” a song he wrote in an hour. The tune stayed at number 1 for six weeks. Sheb made several more appearances on the Billboard Hot Country & Western chart and was soon recruited for a new TV program highlighting rural music called Hee Haw. He appeared as a semi-regular using his alter-ego, a drunken cowboy named Ben Colder, and he also wrote the show’s theme song.

In 1951, Sheb co-starred in a film called Distant Drums with Gary Cooper. He also recorded a series of screams for the film to be used as sound effects when needed. During a scene in which a character is torn apart by an alligator, Sheb’s distinctive and plaintive yelp was dubbed in to the soundtrack. A few years later, sound man Charles Lang used Sheb’s scream in the film The Charge at Feather River, in which a Pvt. Wilhelm is shot. Since then, Sheb’s immortal holler – dubbed The Wilhelm Scream –  has been used in over 200 films and has become a favorite (and sort-of inside joke) of Steven Spielberg, Quentin Tarantino, Peter Jackson, the Disney Studios and George Lucas. It has been included in every Star Wars and Indiana Jones film to date.

Just after his final film, Hoosiers with Gene Hackman, Sheb was diagnosed with leukemia and passed away in 1996 at the age of 82.

But his scream lives on.