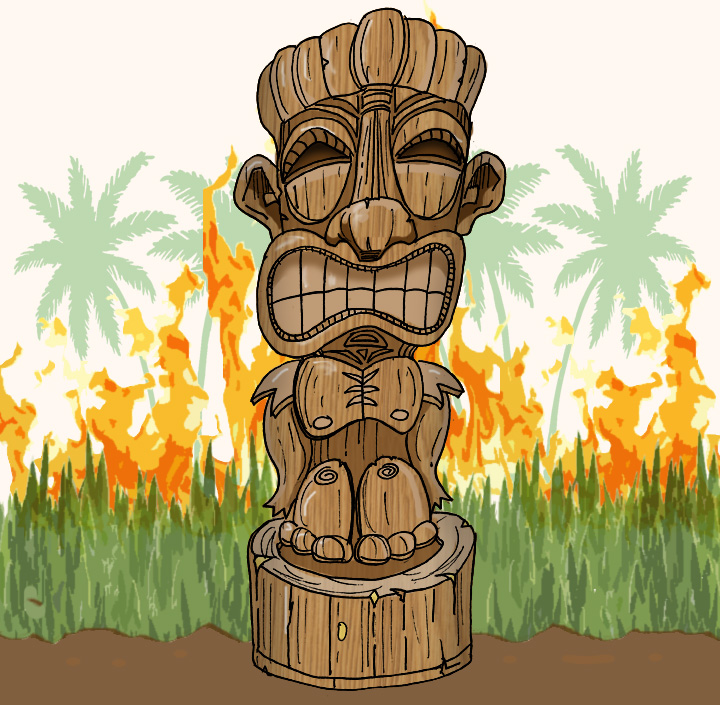 One evening, Mrs. Pincus and I ventured to Harrah’s Casino in Atlantic City to have dinner at their buffet. (Boy! How many of my stories have started out with that sentence?!) After dinner, we wandered into the casino for a little play on the many slot machines. As a member of the Harrah’s Slot Players Club, my wife had several promotional vouchers redeemable for play. Knowing that I get bored quickly by slot machines and I really don’t like handing over my hard-earned income to casinos, she offered the vouchers to me. Meanwhile, she handed over my hard-earned income. Somehow, that indirect path makes it a little less painful.

I took my $25 voucher and parked myself in front of a blinking little machine called “Sneeki-Tiki”. The six electronic “reels” featured a Polynesian theme and winning combinations were rewarded with the strains of digital bongo drums and slack key guitars, along with a monetary gain. I slid my voucher into the cash slot*, selected my bet (2 credits per line, equivalent to 80 cents a spin) and hit the big “SPIN” button. The video reels spun into a blur and finally stopped, giving me a payout of just under a buck. I repeated the procedure, but this time the monitor did not show a single combination of winning symbols… nothing. Once more, I spun, since I had to use the remainder of the non-refundable promo money. On this spin the first reel filled with a monkey, a parrot, a coconut and a bamboo stick. The next four reels displayed a cartoon tiki sculpture that each suddenly expanded to fill the entire reel. The animated character grinned and bellowed “Go Wild” in a distinctly island-tinged accent, indicating that the symbol was “wild” and could be substituted for any and all symbols in play. The last reel slowed to a stop and the machine exploded in music, sound effects and multicolored graphics. A banner proclaiming “BIG WIN” splashed across the screen. For my 80¢ bet, I had just hit for $997.00.

“Cool, ” I thought, but since Mrs. P had disappeared to another part of the casino, I had to celebrate my good fortune silently. I played until my promo funds were exhausted. (I actually hit for another fifty-five bucks on top of my big win, before cashing out.) I grabbed the newly-printed voucher from the machine and set off to locate my spouse.

Clear on the other side of the casino, I found Mrs. P sitting before an Egyptian-themed machine, with a relatively sad look on her face. She was smacking the “SPIN” button on her machine. It was answered, for the most part, with the silence of loss.

Without a word I displayed the plain, black & white, bar-coded piece of paper at eye-level. Her eyes zoomed in on the large, bold print that read $1052.00.

A grin spread across her face, followed by a barrage of questions: “What machine did you play?,” “How much did you bet?,” “How on earth did you walk away?”

I explained my brief – and really uneventful, except for the payoff –encounter with the Sneeki-Tiki machine. Mrs. P. cashed out her meager cash reserve and we left for home.

The next week, we found ourselves, once again, walking the slot machine-lined paths of Harrah’s Casino. I bee-lined to the Sneeki-Tiki, reaching for my wallet before I was even seated. Mrs. P tried to persuade me to increase my bet, mimicking her recklessly exorbitant wagers, but I stuck to my guns and repeated my lucky 80¢ bet. Within seconds, the machine was again ringing with good fortune. A single spin had yielded a return of $275.00. I mashed the “CASH OUT” button and my voucher slid out of the slot.

“Sure,” I replied, “I’m happy with two-hundred and seventy-five bucks that I didn’t have when I walked in here.”

For the rest of the evening, I stood alongside Mrs. P, feeding bill after bill into a variety of slot machines, as she sought out her elusive big pay out.

A few weeks had passed before we were back at Harrah’s, but once exiting the parking garage, I headed straight for my personal, colorful ATM. I strode up to the secluded alcove just off the hotel’s front desk where I was met with a huge shock. Sneeki-Tiki was gone. GONE! In its place was some differently-configured mermaid-themed machine. I scanned the immediate area. The other machines were all the same ones that had always been there. I went over to the convenient “Slot Finder” directory and punched  “S-N-E-E-K” into its virtual keyboard. Nothing. “No Matches Found” was my result. I took my search into the further reaches of the casino floor, but Sneeki-Tiki was nowhere to be found. While I searched,  I’m pretty sure I heard echoing laughter in a distinct, island-tinged accent.

See what I saw, except for the payout… I keep that.

* I don’t know the last time you were in a casino, but slot machines no longer take nor dispense actual coins.