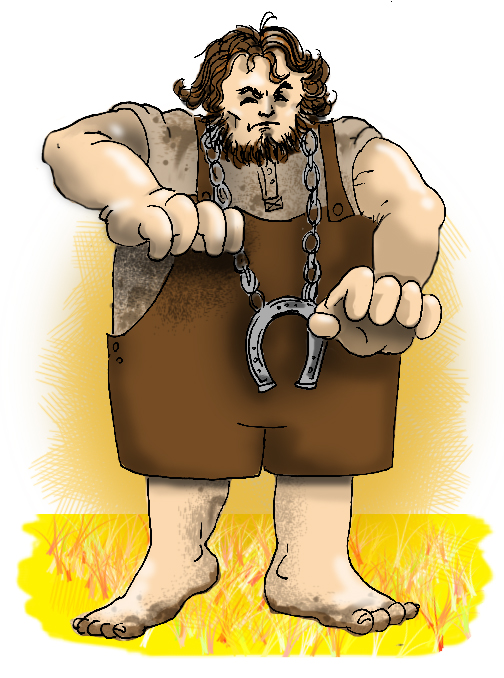 I don’t know how to break this to you, but professional wrestling is fake. That said, William “Haystacks” Calhoun was as close to the real thing as you could get.

Haystacks Calhoun was born in McKinney, Texas and by the time the hulking youth reached his 20s, he tipped the scales at 450 pounds and stood at over six feet tall. A promoter convinced the young Haystacks to consider a career in professional wrestling. He hit the wrestling circuits with a back-story that mirrored his own humble upbringing. He entered the wrestling ring in bib overalls and a lucky full-size horseshoe suspended from a thick chain around his neck. He sported wild hair and an unkempt beard and, of course, he was barefoot. Haystacks was introduced as hailing from the more rural-sounding Morgan Corner’s, Arkansas, but everything else about the massive country boy was authentic. (Although his weight was given as “601 pounds,” it actually fluctuated between 450 and 500 pounds.)

He was an instant crowd favorite, most likely due to the popularity of professional wrestling among the working-class, rural areas of the country. He became nationally known and even appeared opposite Anthony Quinn and Jackie Gleason in a television production of Rod Serling‘s wrestling-themed Requiem for a Heavyweight.  He performed feats of strength on Art Linkletter’s House Party  program,  hoisting huge bales of hay over his head to the delight of the audience.

Despite his considerable size, Haystacks was fairly agile in the ring. And he displayed some knowledge of actual wrestling moves. In 1973, he teamed up with Australian Tony Garea to take the Tag Team Championship belt from the notorious Professor Toru Tanaka and Mr. Fuji. (Tanaka was the stage name of Charles Kalani, Jr., a wrestler, boxer and actor who appeared in over two dozen films and television shows, including The Running Man  and Pee-Wee’s Big Adventure .)

Over twenty years in the ring finally took its toll on Haystacks and he was forced to retire. He was confined to a double-wide trailer after he lost a leg to diabetes. He eventually succumbed to the disease in December 1989 at the young age of 55.

It’s that time of year again. Time for your ol’ pal JPiC to give the gift of music.
My annual Christmas music compilation is available as a FREE DOWNLOAD for a limited time.
24 unusual holiday songs and a custom full-color cover with track listings  all for you and all for FREE!

Just CLICK HERE for A Non-Traditional Christmas 2012.
You will be taken to a new window. Just click the word download next to the title and you’re on your way to holiday music nirvana (although there is no actual Nirvana included on this year’s compilation.)