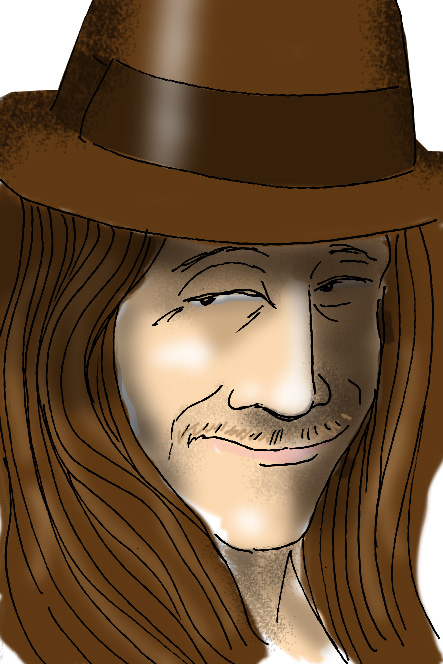 17-year old Steve Took answered an ad in the music newspaper Melody Maker.  Guitarist Marc Bolan was looking for a drummer to join his band and Steve fit the bill. The band, Tyrannosaurus Rex, performed one disastrous show and Bolan fired everyone but Steve. They remained a duo, busking in subways with Steve accompanying Bolan’s acoustic guitar with bongos.

Once in the studio, Steve arranged Bolan’s straightforward rock compositions into a swirly mix of many styles with the addition of African drums, kazoo, pixiphone, and Chinese gong. Their sound was a hit among the hippie crowds that frequented their shows, but Bolan had contempt for Steve’s lifestyle. Bolan, a relatively quiet guy offstage, was awaiting the birth of his first child. Steve, on the other hand, was a heavy drug user hanging with underground bands like The Deviants and The Pretty Things. Steve’s relationship with Bolan deteriorated quickly. After a show, during which Steve spiked the refreshments with hallucinogens, a furious Marc Bolan gave Steve his walking papers and renamed the band T. Rex.

Now on his own, Steve teamed up with his friend Syd Barrett, himself recently canned from Pink Floyd. Steve and Barrett collaborated on a slew of tracks that were never released. Steve then moved on to form the band Shagrat. Shagrat recorded a song called “Syd’s Wine” in which Steve was mysteriously credited as Crazy Diamond , a reference to the Pink Floyd tribute song to Syd Barrett. Steve assembled a few more bands,  but with his drug use steadily increasing, all were short-lived.

Soon, he hooked up with former T. Rex manager Tony Secunda, who promised to fight for unpaid royalties he felt were due to Steve. In 1980, now receiving royalty checks on a regular basis, Steve purchased a stash of morphine and hallucinogenic mushrooms for his live-in girlfriend and himself. After injecting morphine, Steve accidentally inhaled a maraschino cherry from a cocktail and choked to death. He was 31.