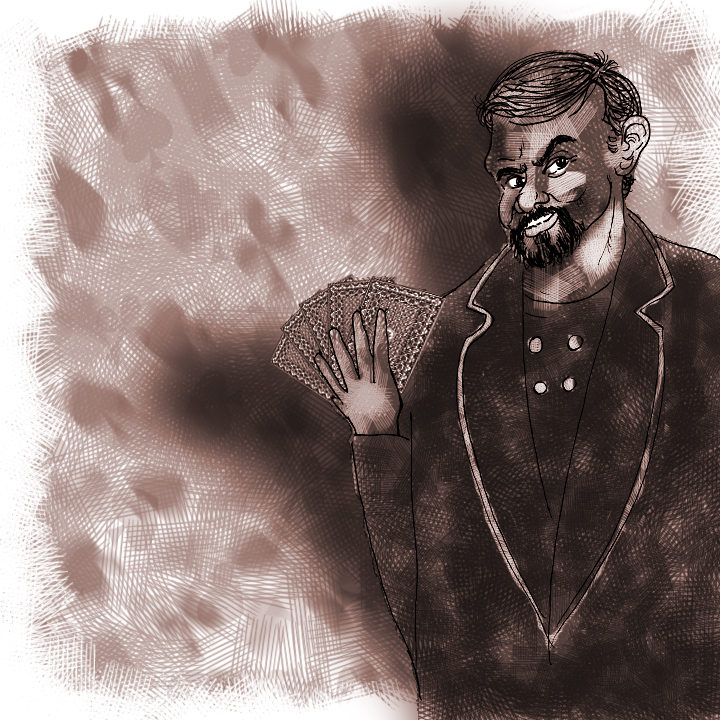 “Canada Bill” Jones would shuffle and trip into a room, wearing ill-fitting clothes and a cocked grin. His hair was mussed and he’d ask stupid questions. And it was all part of his master plan.

Born in England in the early part of the 19th century, Bill moved to Canada while in his 20s. He apprenticed with a veteran gambler and cheater named Dick Cady, who taught the young Bill the ins-and-outs of Three Card Monte. Cady showed Bill the finer points of marking cards and manipulating deals until Bill was adept enough to take his game on the road.

Playing the role of the simple bumpkin, Bill charmed his way into the confidence of rich travellers on the Kansas City and Omaha railroads. He’d smile broadly, shuffle the cards awkwardly and proceed to cheat his unsuspecting opponents (read: suckers)  out of every last cent they carried. He teamed up with fellow card shark George Devol and together the pair swindled the wealthy  including cheating ministers out of their congregation’s collections  all the way though the pre-Civil War South. Canada Bill lived by the creed: “Its morally wrong to let a sucker keep money.”

Bill and Devol switched venues and became fixtures on the big riverboats that chugged up and down the Mississippi River. On one occasion, after being caught cheating by a particular ship’s captain, Bill made a sincere and solemn offer to limit his cheating to only the very  rich and Methodist ministers. The captain kicked them off the ship.

Bill’s weakness, however, was his own propensity to gamble and sometimes he became as big a patsy as his own prey. Once, Devol walked in on Bill playing a game of Faro (a popular card game in the 1800s involving a “dealing box” that was easily rigged). After only moments of observation, Devol told Bill to quit, as the dealer was obviously cheating. Without budging, or even looking up at his cohort, Bill confessed, “I know it’s crooked, but it’s the only game in town.” Bill and George Devol  eventually parted company when Bill caught his partner trying to cheat him.

Bill roamed the country, plying his deception in Cleveland and Chicago. Unfortunately, his own love of gambling caused him to lose his money just as fast as he acquired it. Now in his 70s and in poor health, his travels brought him to a charity hospital in Reading, Pennsylvania where he died penniless. His funeral was paid for by out-of-town gamblers that both respected Bill’s ability and were saddened by the loss of an easy mark. As his casket was lowered into the ground, one gambler in the crowd offered to bet $1000 “that Bill was not  in that box”. He received no takers when someone replied, “I’ve seen Bill get out of tighter spots than that!”