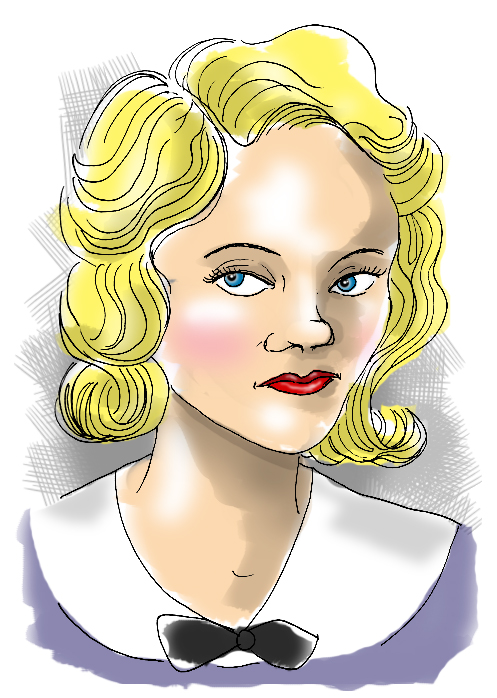 By the late 1920s, Helen Chandler was a huge star on Broadway. Her credits numbered twenty plays ranging from broad farce to Shakespeare. As the 30s approached, she hoped her popularity would continued as she headed for Hollywood. Helen had roles in a few pictures including the film version of her popular stage production Outward Bound,  about passengers stranded on a strange ship only to find out they are all dead and the ship is the transportation to heaven (70 years before M.Night Shyamalan’s The Sixth Sense).  Helen had hoped for the lead role in Paramount’s all-star production of Alice in Wonderland,  but lost out to actress Charlotte Henry. Studio heads tried to console a disappointed Helen by casting her in the role for which she is remembered best — Mina Seward-Harker in the 1931 Universal Pictures horror classic Dracula  opposite Bela Lugosi. Dracula went on to become one of the most successful films of the time.

Unable to ride the success of Dracula, Helen’s career began to falter. She returned briefly to the New York stage, but she could not reignite her earlier popularity. Battling chronic alcoholism and an addiction to sleeping pills, Helen entered a sanitarium in 1940. Her career was over.

In 1950, Helen fell asleep while smoking and her apartment went up in flames. She suffered severe burns that left her permanently disfigured. In 1965, while undergoing surgery for a bleeding stomach ulcer, Helen suffered a fatal heart attack and passed away at the age of 59. Per her wishes, she was cremated. Her ashes were never claimed by any relative and they remain at Chapel of the Pines Crematory in Los Angeles to this day.