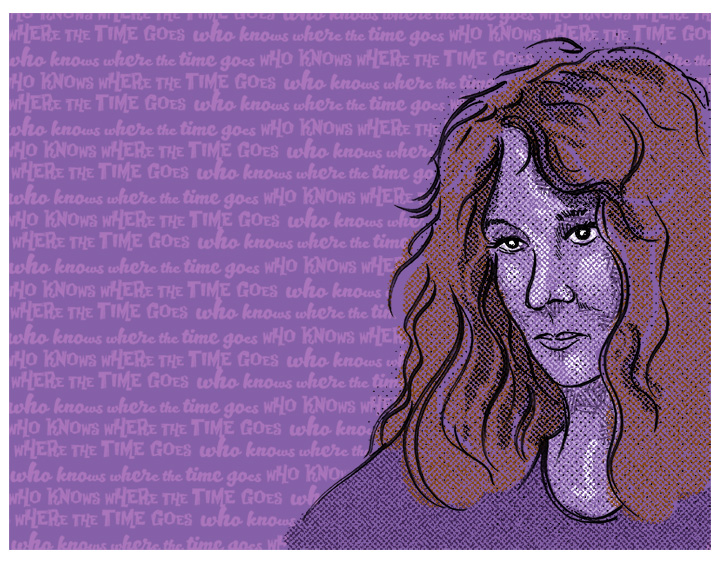 After brief nursing training, Alexandra Denny — “Sandy” to her friends — went against her parents’ strict wishes and took a shot at a singing career. She made regular appearances at clubs in south London. Her popularity increased by word of mouth and soon Sandy joined up with British folk group The Strawbs. American folk singer Judy Collins heard an early recording of Sandy’s composition “Who Knows Where the Time Goes?” Judy recorded the song, prompting an international interest is Sandy’s music.

Sandy began to feel stifled with The Strawbs and looked for a band with which she could expand her vocal reach. The popular folk group Fairport Convention was auditioning vocalists to fill the spot left by the departing Judy Dyble. Sandy was the unanimous choice. She stayed with the band for just over a year, recording three albums before starting her own band, Fotheringay, and then embarking on a solo career.

In the 70s, Sandy released several solo albums. In 1971, she was asked by Robert Plant to perform a duet. The song, “The Battle of Evermore” on Led Zeppelin’s fourth album, became the only appearance by a guest vocalist on a Led Zeppelin album. In 1974, she returned briefly to Fairport Convention for a world tour.

Sandy was feeling the pressures of recording, writing and touring and found comfort in alcohol and cocaine. By the late 70s, Sandy’s drug intake was increasing. She continued using cocaine even while pregnant. After her daughter was born, Sandy exhibited erratic, irresponsible behavior. According to her friend, singer Linda Thompson: “Sandy was in car accidents and was leaving her baby in pubs.” In March 1978, while on vacation with her daughter and parents, an inebriated Sandy fell down a flight of stairs and hit her head on a concrete floor. She was prescribed a powerful painkiller to combat her intense headaches. Just days after the fall and not fully recovered, Sandy performed a concert, while her husband, producer Trevor Lucas, fled to his native Australia with their daughter, hoping to avoid further possible harm. A few weeks later, in mid-April, Sandy fell into a coma and passed away from a mid-brain hemorrhage, a result of her spill down the stairs. Sandy was 31.

Sandy’s husband Trevor suffered a fatal heart attack in 1989. Control of Sandy’s estate was turned over to Trevor’s second wife. Sandy’s daughter, Georgia, has never spoken about her mother in public. She turned down an offer to write the liner notes for a 2000 posthumous release Sandy Denny Live at the BBC.  A group of Sandy’s friends and colleagues recorded an album of Sandy’s compositions to honor the birth of Georgia’s twin daughters — Sandy’s grandchildren.