This week’s Illustration Friday word is “puzzled”. This is one of two illustration that fit the topic. HERE is the other. 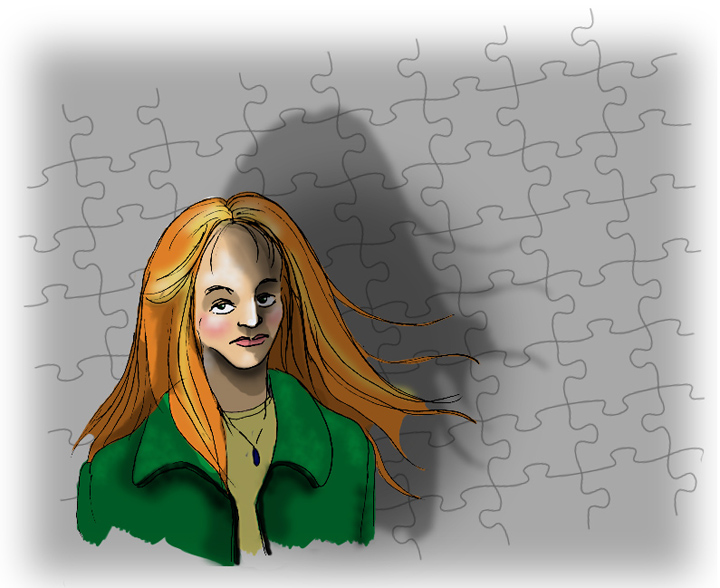 Where ever she was — whether it was on the front lawn with the other evacuees or in her home watching it all unfold on the live local news coverage — Robyn Anderson was puzzled. Just three days earlier, Robyn was dancing at her senior prom. She mingled with classmates — laughing, reminiscing — with some, prophetically, for the last time. But, as she watched, in horror and disbelief and confusion, she remembered what she had done six months earlier.

Robyn was a church-going, straight-A student who made her parents proud. In ninth grade, she met an awkward and brooding boy in her class and the two became friends. They studied together and, although she didn’t share  his interest, Robyn watched as he spent hours playing computer games. Over the years, Robyn was always “one of the gang.” The two grew close and she knew of his social troubles at school. She tried her best to encourage and support him, as any friend would. Despite the lack of a mutual romantic feelings, Robyn asked him to the upcoming prom, knowing full well that he never dated. He accepted, with the provision that she do something for him. She agreed, later telling a girlfriend, “I am either really cute or just really persuasive!”

In November 1998, the boy, Dylan Klebold, asked Robyn to accompany him and his pal Eric Harris to a gun show in Denver, Colorado. Dylan and Eric, their birthdays still several months away, knew Robyn had turned 18 (the legal age to purchase firearms) two weeks before. Robyn figured that since Dylan had a job and income and didn’t spend money on dating, this is what interested him. He was certainly free to spend his money on whatever he wished. The trio arrived and entered the enormous room that housed the gun show. It was stocked with row after row, table after table of every shape and size of legal firearm imaginable. They approached one table and Dylan spotted a double barrel shotgun lying on its side, its black muzzle pointing at the curious and prospective customers. Dylan asked the price — $245 — and Robyn announced to the vendor that she was eighteen. When questioned, Robyn produced her driver’s license and after a little scrutiny, the sale was completed. Dylan reached for the gun first and the vendor asked, “Being a gentleman and carrying it for the lady?”

During the afternoon, they made made two more purchases — another shotgun and a rifle. Each transaction went as smoothly and uneventful as the first. As they made their way back to Littleton, Robyn was satisfied that she upheld her end of the deal. Now, she had high-school-girl visions of herself and Dylan at the prom.

When they arrived at Dylan’s house, a disturbing thought crossed Robyn’s mind, and she bluntly asked, “You aren’t going to do anything stupid, are you?”