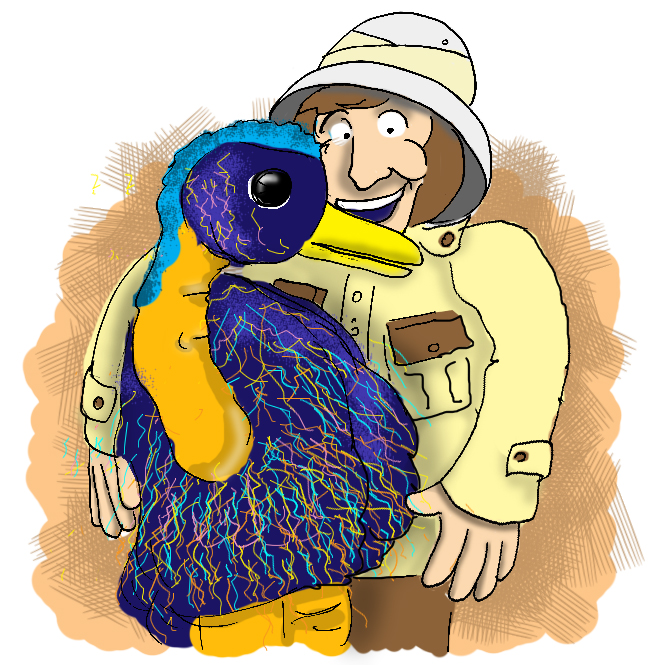 British-born Rod Hull moved to Australia in the early 1960s and got a job as a lighting technician on Sydney’s Channel 9 Network. Soon, he was appearing as Constable Clot, a popular daydreaming character on daytime television aimed at children. At the request of the show’s producer, Rod began performing with an ingenious emu puppet. Rod’s hand and arm became the emu’s head and elongated neck, while a false arm extending from Rod’s jacket appeared to wrap around the giant bird’s torso. Rod perfected his interaction with the emu character so well that it looked as though the puppet was actually alive  and out of control. On numerous television and nightclub appearances, the emu would wreak all sorts of destructive havoc while poor Rod tried  helplessly and unsuccessfully  to maintain composure and keep the beast restrained. The effect was convincing  and hysterical.

Rod returned to his native England. He was a guest on many television programs, including the popular Michael Parkinson interview show, where, again, Rod attempted to corral the emu as it attacked both set and host. The audience was in stitches, as was Parkinson. Crossing the ocean, Rod was a semi-regular on The Hudson Brothers Razzle Dazzle Show,  a Saturday morning variety show for kids. He famously appeared on The Tonight Show,  where he ignored producer’s warnings and “allowed” the emu to attack Johnny Carson and guest comedian Richard Pryor, who was fresh from recent surgery.

As the 80s became the 90s, Rod’s popularity diminished and his television appearances were less frequent. A British documentary, Rod Hull: A Bird in the Hand,  revealed that Rod resented the puppet. He felt that, despite overwhelming but brief success, the emu held him back from pursuing other areas of show business.

In March 1999, Rod was watching a championship football match at his home in Southeastern England. He climbed up on the roof to adjust an antenna to improve reception, when he slipped and crashed through the roof of an adjoining greenhouse. He was pronounced dead at a hospital, having sustained severe skull and chest injuries. Rod was 63.