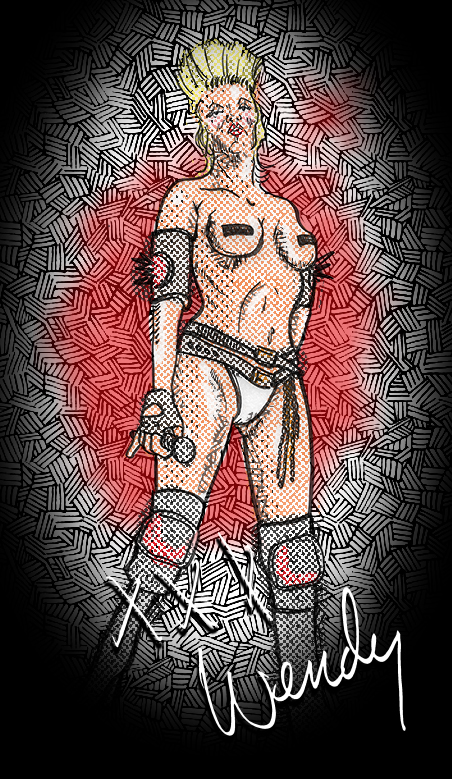 In the end, Wendy O. Williams had just about enough of the world’s shit.

As a child in Webster, New York, Wendy was a student of music, studying the clarinet and even making an appearance on The Howdy Doody Show.  At 16, she ditched school and hitchhiked her way across the country, selling crocheted bikinis to pay expenses. In 1976, she arrived back in New York and found an audition ad for an experimental performance group that piqued her interest. She showed up at Captain Kink’s Theatre and instantly clicked with “The Captain” Rod Swenson. Rod, a Yale MFA graduate, encouraged Wendy and with his assistance, she formed the seminal punk/metal band The Plasmatics in 1978.

The Plasmatics, with bleached-blond mohawked Wendy at the helm, were pioneers in the shocking stage antics that made “punk” punk. During performances, they would destroy guitars with a chainsaw, demolish televisions with sledgehammers and, on occasion, detonate a Cadillac piled high with explosives. In 1981, Wendy was arrested in Milwaukee for simulating sex onstage. She was additionally charged with battery when she allegedly attacked the arresting officer. In Cleveland, she took the stage dressed only in dollops of shaving cream and was, again, promptly arrested for public nudity and obscenity. All of the charges were eventually dropped and Wendy took to wearing strategically placed strips of electrical tape to avoid further incidents. Offstage, she was fined $35 dollars for punching a photographer after he took a picture of her on her morning jog.

Despite her notorious reputation, Wendy was nominated for a Grammy in 1985 for Best Female Rock Vocal Performance. (She lost to Tina Turner.) She recorded several solo albums including a 1984 effort produced by KISS bassist Gene Simmons. As an actress, Wendy appeared in the exploitation film Reform School Girls and the X-rated feature Candy Goes to Hollywood.

In 1991, she put the music business behind her. She and Rod Swenson moved the tiny community of Storrs, Connecticut. Leaving her controversial career and fearsome behavior in her past, Wendy devoted her attention to wildlife rehabilitation while working in a local heath food store. She became a vocal proponent for animal rights and vegetarianism.

On April 6, 1998, Rod returned to their home after a trip to the supermarket. He found a note from Wendy that read:

I don’t believe that people should take their own lives without deep and thoughtful reflection over a considerable period of time. I do believe strongly, however, that the right to do so is one of the most fundamental rights that anyone in a free society should have. For me, much of the world makes no sense, but my feelings about what I am doing ring loud and clear to an inner ear and a place where there is no self, only calm.

Rod searched a wooded area behind the house — an area where Wendy liked to walk, feed the forest animals and gather her thoughts. He found her body on the ground beneath the trees — a pistol lying by her side and a gunshot wound in her head. Wendy was 48 years old.