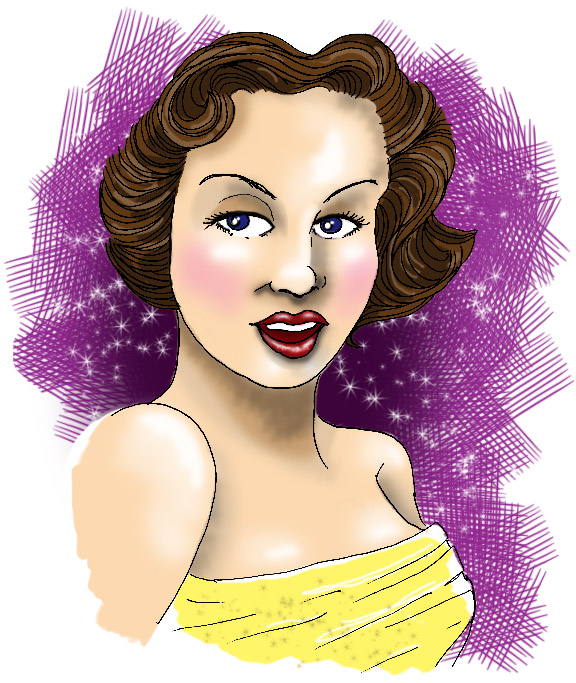 For aspiring model Barbara Bates, the world was her oyster. As a teenager, she won a train ticket to Hollywood as a prize in a beauty contest in hometown Denver. During her whirlwind trip, she met Cecil Coan, a publicist for United Artists. 45-year old Cecil was smitten with 19-year old Barbara. Through his show business connections, Cecil got Barbara a contract with Universal Pictures. She was cast a one of several dancers behind star Yvonne DeCarlo in the 1945 film Salome Where She Danced.  A short time after filming wrapped, Cecil left his wife and four children and married Barbara. Barbara began regularly appearing in uncredited background roles in films and pin-up spreads in publications like the Armed Forces magazine Yank.

In 1947, Barbara signed with Warner Brothers. Warners presented Barbara as “the girl next door”. Her wholesome image landed her opposite Danny Kaye in the musical comedy The Inspector General.  During production, Barbara began an affair with co-star Kaye and soon had her contract with Warners terminated when she refused to take part in a promotional publicity tour for the movie.

Despite her being fired, she was quickly snatched up by 20th Century Fox. Within the year, she appeared in her most memorable role as “Phoebe” in the final scene of the Bette Davis tour-de-force All About Eve.  Although her screen time was brief, Barbara was critically praised for the powerful, yet prophetically evil, performance that brought the film’s story full circle. She followed All About Eve  with Cheaper By the Dozen, Let’s Make it Legal  and even a turn with Dean Martin & Jerry Lewis in The Caddy.

The early 50s brought Barbara unfounded feelings of insecurity, resulting in irrational mood swings and chronic depression. She began work on a TV sitcom called, ironically, It’s a Great Life,  co-starring a pre-Andy Griffith Show  Francis Bavier. Seven episodes into the series, Barbara’s character was written out of the show. Barbara’s erratic and disruptive behavior got her fired. Gaining a bad reputation in Hollywood circles, Barbara traveled to England to find work. She signed as a contract player with noted producer J. Arthur Rank’s studio. After two months, Barbara’s missed appointments and emotional instability again caused her to be dismissed.

She returned to the United States in 1960 where she and Cecil moved into a small Beverly Hills apartment. Later that year, Cecil was diagnosed with terminal cancer. Barbara was devastated and rarely left her husband’s side. She doted over him until the pressures became too much and she slit her wrists in an unsuccessful suicide attempt. Cecil passed away in January 1967. Depressed and despondent, Barbara totally abandoned her acting career. She returned to her Denver roots where she worked, at various times, as a secretary, a dental assistant, and a hospital aide. She married a childhood friend, but just four months later, Barbara purposely locked herself in her mother’s garage with her car’s engine at full power. She died of carbon monoxide poisoning at 43.