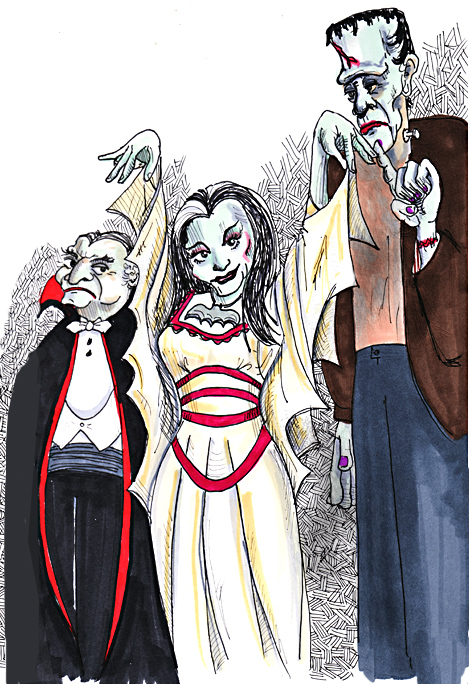 With their time winding down on the popular sitcom Leave It to Beaver, Bob Mosher and Joe Connelly began working up ideas for a new show. It would be a parody of the typical depiction of the American family à la Donna Reed. Only this family would be a family of monsters.

Mosher and Connelly knew casting would be crucial for the show’s success. They offered the role of mad scientist vampire Grandpa to veteran actor and vaudeville comic Bert Lahr, best known as the Cowardly Lion in the 1939 classic The Wizard of Oz. The role of family patriarch Herman Munster was pitched to horror film actor John Carradine. Both actors turned the respective roles down, although Carradine popped up later in the series as Herman’s funeral home boss, Mr. Gateman. Connelly offered the part of Grandpa to Al Lewis. Lewis was a former burlesque comic who laid claim to an illustrious collection of past employment including circus clown, Ebbets Field hot dog vendor and professional basketball scout. The part of Herman was given to actor and one-time editor of Harvard Lampoon Fred Gwynne. Lewis and Gwynne had previously worked together in producer Nat Hiken’s sitcom Car 54, Where Are You?  With two proven comedic talents onboard, Mosher and Connelly were faced with casting the right actress to play the pivotal role of Lily, Herman’s monstrous, yet level-headed, wife. They nabbed glamorous Hollywood starlet Yvonne DeCarlo. Gwynne and Lewis were furious and the complaining began.

Yvonne, who felt she was above playing in a sitcom (even though she agreed to the role) behaved “holier-than-thou.” “She stayed in her dressing room while we were outside, just waiting for her.,” Gwynne remembered. Yvonne regularly held up production with her constant adjustments to make-up, hair, and nails. She dictated which scenes would be shot, all from the vantage of her convenience. Gwynne and Lewis became enraged as production halted and the crew waited. Finally Al Lewis had taken enough and pulled aside the beauty queen and confronted her about her demanding attitude.” Abe Haberman, Yvonne’s personal make-up man, said, “Yvonne was a little difficult for other people. She fired five hairdressers. She hated the green make-up, insisting she should look more beautiful, but the network refused.” The two younger members of the cast – Beverley Owen (and later, Pat Priest) who played Marilyn Munster and Butch Patrick who played little Eddie Munster – did their best to avoid the on-set fireworks.

The Munsters was incredibly popular, yet it was canceled after only two seasons. Nobody understood the reason for its termination, but producer Joe Connelly explained the reason for the show’s end. “The actors were a pain in the ass. Fred and Al objected to everything. Fred hated the make-up and caused a lot of trouble about it on the set. We could not stand Fred Gwynne, Al Lewis and Yvonne DeCarlo.” Connelly dealt with what he felt was incessant and obnoxious complaining. “We had to put up with a lot of shit from them. The sponsor had enough and Bob Mosher and I had just had enough, too.”