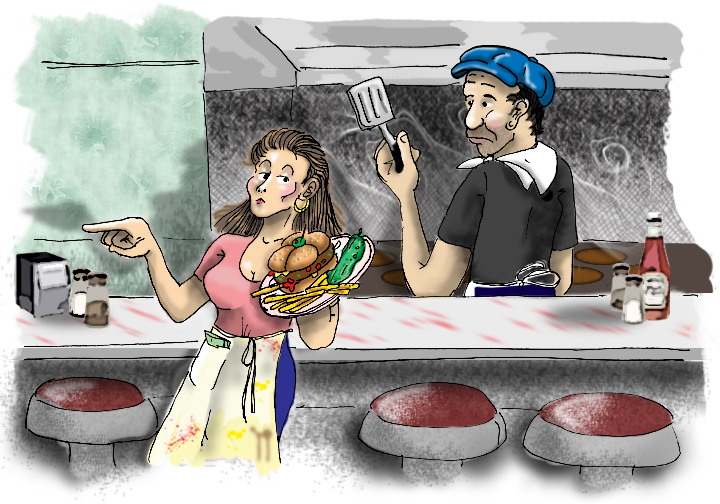 For years, my wife has been in pursuit of the perfect hamburger. While a lot of carnivores share this quest, it should be noted that Mrs. Pincus has kept a strictly kosher diet for over forty years. Eating kosher meat within the privacy of one’s home is a fairly easy task. At one time, a kosher butcher shop was the only outlet for certified kosher meat. As time went on and the number of families seeking kosher products increased, major supermarkets began stocking a variety of commercially-packaged meats along with other mashgiach– supervised groceries. Thus, the preparation of kosher meals at home is not difficult, however finding a decent kosher restaurant in the Philadelphia area is another story.

In New York, the city that never sleeps, you can swing a tallit over your head and hit six kosher restaurants with no effort. But Philadelphia, the fifth largest city in the country with the sixth largest population of Jews (206,000 of ’em), can’t keep a kosher restaurant in business to save its life. In the thirty years since I began to observe the laws of kashrut, I have seen kosher eateries come and go as quickly and abruptly as the Red Sea swallowed up Pharoah’s army. The problem with the majority of these places is they are either run by people with no business or restaurant experience or they are filthy and unappetizing. One day, my in-laws told us of yet another new kosher restaurant that opened in Northeast Philadelphia and my wife and I decided to give it a try. Perhaps this will be the one that makes Mrs. Pincus’ Hamburger Hall of Fame.

We drove out to the Northeast and pulled into the parking lot of one of the many cookie-cutter strip centers that line Castor Avenue. Squeezed between a credit union and a dry cleaner was a small storefront passing itself off as a restaurant. Once inside, we had our choice of tables, since we were the only customers. (That was not particularly encouraging considering it was the customary dinner hour.) We sat and were greeted and handed laminated menus by a young waitress. I perused the surprisingly numerous offerings. My wife, however, studied the “Hamburger” section of the menu, her eyes not straying to other areas — no matter how enticing. A few minutes later, the waitress returned and we placed our order. I’m sure I ordered something simple and sandwich-y. My wife ordered a hamburger with some cutesy name, but a hamburger no less. The restaurant’s decor left a lot to be desired. So with little distraction, we chit-chatted while we waited for our meals.

Soon, the waitress approached our table with two plates laden with steaming food. My wife’s burger looked delicious — decorated with green lettuce, red tomato and a variety of condiments — and judging from the way she savored every bite, it tasted delicious as well. All through dinner, Mrs. Pincus talked about how much she was enjoying her burger and when we finished and were presented with the check, she expressed her pleasure with the meal to the waitress before even being asked.

When I arrived home from work the next day and inquired about dinner plans, my wife excitedly suggested the restaurant from the previous evening. She said she had thought about the burger from the night before and really wanted another one. So, again, we trekked out to the Northeast for a repeat performance from the chef at the new kosher restaurant. We essentially mimicked our actions from the night before, right down to occupying the same table. On this evening, a different waitress took our order and we chuckled that a place with such sparse business needed more than one server. Of course, Mrs. Pincus ordered the same burger. A short time later, the waitress returned and placed a platter before my wife. It didn’t look remotely like the burger she had enjoyed so much a mere twenty-four hours earlier. It was on a different type of bun. It had different accoutrements and the burger itself was speckled with unidentified bits of red and green that weren’t present in the previous version. My wife beckoned the waitress over to our table and asked, “Is this what I ordered? I’ve gotten this before and it looked… er… different.”

The waitress replied, “I’ll ask.” and she scooped up the plate and walked toward the visible open grill behind the counter not ten feet away from us. The grill was being manned by a burly fellow with a white napkin knotted around his neck. Smoke rose from several meat patties sizzling on the grill, but for whom they were intended I couldn’t say, since again, we were the only patrons. The waitress pointed to us and began to converse with the chef in Hebrew, intending to keep their dialogue confidential.

Luckily, my wife, a graduate of many years of Hebrew studies, speaks fluent Hebrew and she smiled as she whispered the entire translated exchange to me as it unfolded.

“She says it looks different from the last time she got it.,” said the waitress in Hebrew, her finger jabbing the air in our direction.

The chef, not looking up and focusing his attention on his frying burgers, replied in Hebrew, “Just tell her that how we make them in Israel.”

A frown wrinkled our waitress’s face and she studied my wife for a moment. From afar, she examined her long, straight, dark hair cascading over her shoulders. She scrutinized her dark complexion and analyzed her dark eyes. She then turned back to the chef and, again in Hebrew, reported her conclusion in a tone of trepidation.

Needless to say, that was our last visit and the place didn’t last out the month.