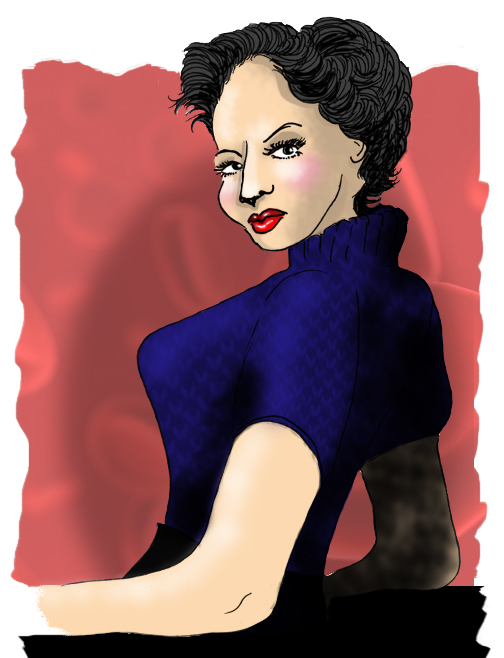 Even after winning the 1949 Miss Washington DC Pageant, Mary Jane Hayes wasn’t interested in a career in movies. She did some modeling, though, and it was during a photo-shoot that she was approached by a talent scout from Warner Brothers Studios. Mary Jane turned down his offers of “stardom”, but on a subsequent visit to New York City, she gave the scout a call. He invited her to make a screen test at the New York office.

Once in Hollywood, she began shooting her first picture, Sign of the Pagan  with Jack Palance as Attila the Hun. She also changed her name to the more exotic “Allison”. During filming, Allison began a relationship with her co-star Palance. He treated her poorly, both on the set and off. Soon, she moved on to other pictures with a long line of leading men including Tony Curtis, Van Heflin and Raymond Burr. Cecil B. Demille almost cast her as Moses’ wife in his epic The Ten Commandments,  but it was revealed that she was under contract to Universal and she lost the part to Yvonne DeCarlo.

In 1956, Allison worked with legendary B-movie director Roger Corman on the Western Gunslinger  with star John Ireland. The location shoot was plagued with four days of rain and, in the resulting mud,  Allison was thrown from a horse and broke her arm. She quipped to director Corman, “Who do I have to fuck to get off this picture?”

Allison consulted with a doctor for treatment of her arm and was prescribed a calcium supplement to aid in the bone healing. Ready to get back to business, she was cast in a string of horror movies culminating with her best-remembered role in the cult classic Attack of the Fifty-Foot Woman,  in which she played the titular character. In the film, Allison wreaked havoc on those who did her wrong, including co-star Yvette Vickers.

Allison’s career kept her busy, even if the budgets of her pictures were greatly reduced. She also continued to ingest the calcium supplements although she felt they were draining her energy and making her weak. With her films drawing fewer crowds and her health slowly declining, Allison began to take smaller roles in episodic television. She voluntarily stopped taking her calcium medication and decided to give the remaining pills to a toxicologist. Reports came back to Allison with startling news. The pills that she had been taking regularly for years contained a high amount of lead and Allison was suffering the effects of advanced lead poisoning. Even while tending to her personal health needs, Allison mounted a campaign to have the FDA ban the import and sale of the particular food supplement.

On February 26, 1977, the now-invalid, 46-year-old Allison was moved to a San Diego medical center. She was experiencing chills, flu-like symptoms and intense pain. She died the next day. Shortly after her death, a letter arrived from the FDA explaining that, as a result of her actions, amendments were being made to the laws governing the importation of nutritional supplements.