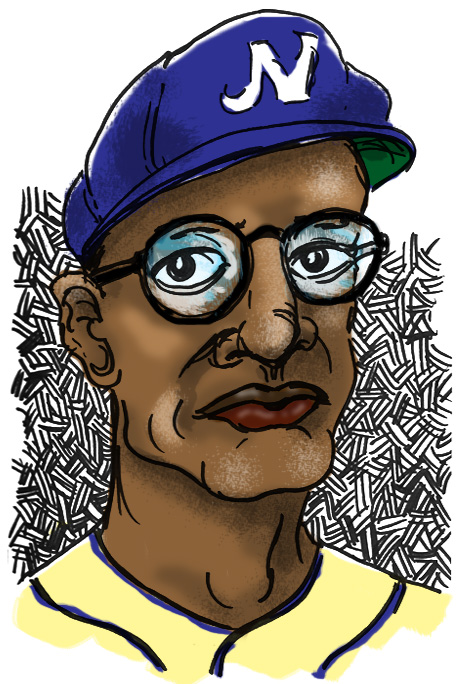 For 28 years, Max Manning taught sixth grade in Pleasantville, New Jersey before retiring in 1983. In those years, how many students knew anything about their teacher’s past?

Max was born in Georgia and grew up in South Jersey, just outside of Atlantic City. He was a stellar athlete on his high school’s baseball team. Word of his on-field abilities made its way to a scout from the Detroit Tigers and a contract offer was tendered. But the offer was rescinded when the team discovered that Manning was black.

Soon he signed a contract with the Newark Eagles of the Negro League. Nicknamed “Dr. Cyclops” because of his thick glasses, Max developed his sidearm pitching style and posted good numbers in strikeouts and wins. However, his baseball career was put on hold briefly when Max entered the Air Force in World War II. During his military service, he faced racial prejudice, with one incident landing him in the stockade for fifteen days. Later, he suffered a back injury in a truck accident and was discharged. Despite the injury, Max was determined to resume pitching for the Eagles.

Max returned to baseball and in 1946 he finished the regular season with a record of 11-1 with the second-highest league strikeout total. Pitching through constant back pain, Max helped the Eagles overcome the mighty Kansas City Monarchs to win the 1946 Negro League World Series. After the World Series, he barnstormed with greats like Satchel Paige, Bob Feller and Buck Leonard, but his physical ailments forced his career to an end.

On his wife’s insistence, he returned to school on the GI Bill and earned a teaching degree from Glassboro State College. He taught, and was beloved by students, at the Pleasantville Elementary School for 28 years. After retiring, Max kept busy with gardening and with his family until he passed away in 2003 at age 84. Just before he died, Max gave a lengthy and enthusiastic interview to the History Channel detailing his baseball career. I wonder how many of his former students watched it?