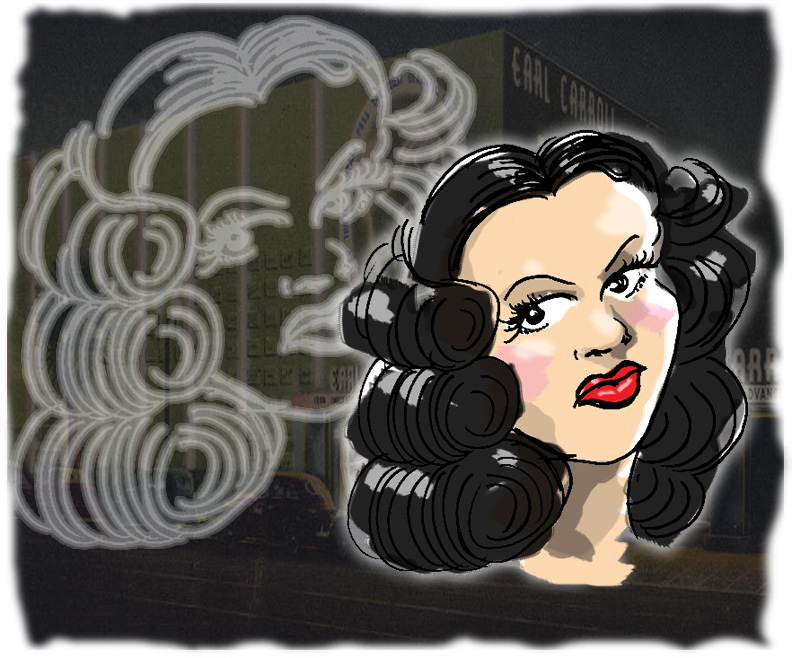 Teenage aspiring dancer Beryl Heischuber answered a casting call ad and landed a role in the 1928 production of Vanities  at the Earl Carroll Broadway theatre. Using the more accessible (and more pronounceable) name “Wallace”, Beryl appeared amid dozens of other young dancers billed under the umbrella title “the most beautiful girls in the world”. She performed in six more variations of Vanities  at Earl Carroll’s venue, most notable for their risqué premises, scantily costumed females and full nudity for the first time on Broadway.

Beryl began a relationship with theatre owner Earl Carroll, who was 16 years her senior. When Carroll opened his Hollywood location of the Earl Carroll Theatre on Sunset Boulevard in 1938, the building’s facade boasted a 20-foot high portrait of Beryl in neon. Beryl was featured in small roles in several “B” Westerns with co-stars like Tom Keene and Roy Rogers, but her primary job was star performer at Earl Carroll’s Theatre.

On June 17, 1948, Beryl and Earl Carroll were aboard United Airlines Flight 624 from New York City to Los Angeles when the flight crew received warning of a fire in the cargo hold. Although it turned out to be a false alarm, procedure dictated that CO2 be released into the area to extinguish the flames. However, relief valves were not opened and carbon dioxide seeped back into the cockpit, incapacitating the crew. The aircraft was put into an emergency descent. It struck a high voltage power line, burst into flames and crashed into a wooded hillside near Aristes, Pennsylvania. All 39 passengers, including Beryl Wallace and Earl Carroll, were killed.

The Earl Carroll Theatre continued operation after its founder’s death. In the 1950’s, it fell on hard times and was purchased and re-opened as The Moulin Rouge nightclub. Later, the TV game show Queen for a Day  was broadcast from the theatre during its nine-year run. Once again, the venue changed hands and became the Hullaballoo Rock and Roll Club, capitalizing on its popular TV namesake. In the 1960s, it was renamed “The Aquarius Theatre” and was home to the long-running musical Hair  during its West Coast run.  The Doors even performed there in 1969. In the 80s, the theatre served as the studio for nine seasons of Star Search  and for many Jerry Lewis Telethons. In the early 90s, it was once again renamed, this time “The Chevy Chase Theatre” for five weeks, until the comedian’s disastrous talk show was canceled. More recently, the location is known as “Nickelodeon on Sunset” and is the filming location for current shows* like iCarly  and Victorious,  as well as past favorites like All That  and Drake & Josh.  Although a reproduction is displayed at Universal Hollywood’s CityWalk, the original neon portrait of Beryl Wallace vanished decades ago.

* No new shows have been filmed here since 2017 and all Nickelodeon signage has been removed from the building. Rumors about its future usage have included possible tenants James Corden and Bill Maher.