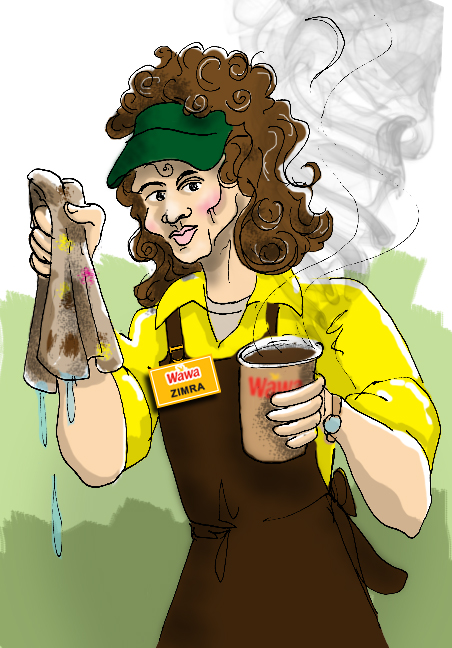 When my parents gave me my first box of crayons and a blank drawing pad, they had no idea I would turn it into a career. I majored in art in high school and attended a vocational art school after spending a year in the retail world and realizing that I was better suited for a more creative profession. After earning my degree, I became the art director for a small chain of ice cream stores in the Philadelphia area. This was a great opportunity for a young graduate and I was anxious to let my imagination and school-acquired skills loose on the world. After a year, the company eliminated their in-house art department (of which I was the sole member) and I was out of a job. I soon began the gruelling course of a freelance artist. I filled-in at a few production houses* doing paste-up for newspapers and other various publications. In between jobs, I concentrated my efforts on finding full-time employment, as I was newly-married with a child on the way. I checked the “Help Wanted” section of the newspaper on a daily basis, but the “artist” listings were usually short and limited to painter’s assistant jobs and counter help at quick-copy service stores. I maintained contact with some classmates and my art school’s placement office for job leads, but the pickings were slim.

One morning, I circled an ad in the Philadelphia Inquirer. It seemed an ad agency on the prestigious Main Line section of suburban Philadelphia was seeking an artist/designer. I called the number and spoke briefly to a female voice who made arrangements for me to come in for an interview this upcoming Saturday evening. I thought it was an odd day and time for an interview, but who was I to question? I needed a job. With only one car, my wife drove me and my small portfolio of printed samples of my work out to – what would hopefully be – my new job location.

After consulting a map (remember, this was the days before the Internet and the GPS), we navigated the streets. Surprisingly, we arrived in a residential neighborhood, not an office building as I had expected. Checking the address again, we pulled up to the curb in front of a modest house surrounded by other similar-looking houses. I, in my suit and tie, walked up to the front door and rang the door bell. I half-expected that I was at the wrong location, but when an expressionless woman opened the door and greeted me with “You must be Josh,” I knew this must be the place. I entered her home and was directed to the dining room table. The woman introduced herself as Zimra Chorney – slightly older than I with unkempt, curly hair and clipped, bird-like features – and asked to see my portfolio. I had been on many interviews since my recent entry into the art business, but most (if not all) had been conducted in an office or a working design studio. I unzipped my small leather case and opened it to face my inquisitor. Silently, she turned the protective plastic pages of newspaper ads, ice cream promotional flyers and the occasional illustration. She examined my work through squinted, judgemental eyes set in her vacant face. Zimra reached the final page and closed the back cover. She then turned to a shelf and removed several folded pieces of solid-colored card stock. Her claw-like hands opened one of the folded pieces to reveal a black-and -white printed advertisement for, what appeared to be, a bakery.

“This,” Zimra began, “is the sort of promotional work we do.” and she gently tossed a few similar pieces in my direction. (“We,”  I thought as I cautiously looked around, “Who is ‘we’ “? ) I opened one of the cards and skimmed the content. The outside of the brochure was solid, glossy magenta with no type or art whatsoever. Inside, it was very wordy with some small illustrations of birthday cakes and cupcakes spaced throughout, failing in their attempt to comfortably break up the over-abundance of descriptive text. I could tell the other brochures that I left unopened on the table were similar, the outside color being the only variance. I feigned a smile at the brochures and nodded, but offered no comment or criticism. That was good, because Zimra had plenty to say in the criticism department.

She stood across the table from me and expounded on the lack of professionalism of my work. She explained that my work was weak and of poor quality and content. She displayed one of her brochures, looked lovingly at the piece and, injecting a haughty tone into her speech,  said “This is more along the lines of the type of high-quality and professionalism we seek and expect.”  As she spoke, she caressed the folds of the brochure and ran her bony fingers along the glossy ink of the cover.

“In a few years, if your talent and abilities are more developed, we may be interested.,” she said, using the royal “we” once again. Zimra escorted me to the door and showed me out. I don’t even remember walking down to my car. My wife asked how things went and, by the bewildered look on my face, her question was answered.

Jumping forward a few years, I had produced a body of work of which I was quite proud. I had redesigned the mastheads of several newspapers and magazines. I had created adverting pieces for such varied companies as Motorola, Holiday Inn, an East coast chain of turnpike rest stops and some major area department stores. I worked closely with an advertising agency, where I single-handedly designed and produced an annual plumbing supply catalog. I briefly entered the publishing industry, where I maintained a roster of no less than twenty-five newsletters and dozens of books. I ran the creative end of a real estate ad agency. I returned to the world of retail advertising and became the art director for a local chain of carpet and flooring stores whose headquarters was on the Main Line.

One day, on my way to work, I stopped for coffee at a Wawa convenience store on Montgomery Avenue. (Wawa is a very popular spot in the Philadelphia area for a quick bite, great coffee and that forgotten quart of milk or loaf of bread on your way home. And it’s much cleaner and friendlier than 7-11.) The coffee service area was bustling and crowded, as is normal for a workday morning at Wawa. I filled a 20 ounce cup with java, cream and one Sweet ‘n Low. I dodged a female employee who was wiping up a spill at the counter with a dingy, gray rag. As I made my way to the checkout to pay for my purchase, the same female employee jumped behind a cash register to help handle to overflow of customers. She wore the standard Wawa-issued visor to corral her unkempt, curly hair. The dark brown of her apron could not adequately hide the stains that peppered the front of the garment. She looked familiar, too. The name badge affixed to her apron’s shoulder strap was emblazoned with “ZIMRA” in big. black letters.

As the customers before me, one-by-one, paid for their selections, I fixed my gaze on the woman who once belittled me for my lack of talent and professionalism. This woman, who just a few short years ago insulted the quality of my work, was now wearing a dirty apron, sopping up spilled coffee and running a cash register in a convenience store. The last time I held a job in the same range as this, I was eighteen years old.

I walked out of that Wawa and I never saw Zimra Chorney again. My career as a professional artist has continued to flourish and I have learned, grown and improved with each subsequent job I have taken. My initial meeting with Zimra taught me a lesson, but not the lesson she wanted to teach. My second meeting taught me more. Do I ever wonder what ever became of Zimra Chorney? Honestly, I don’t give a shit.

* In the days before computers, desktop publishing and the Internet, printed materials – such as newspapers, books, and brochures – were produced and assembled by hand, in a tedious, time-consuming process called “paste-up” that involved X-acto knifes, heated adhesive wax, typeset galleys, rulers, border tape and non-reproductive blue pens.