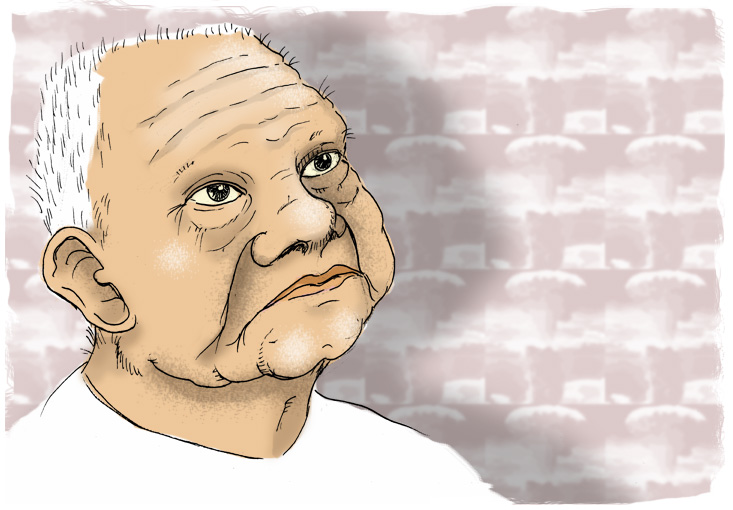 Tsutomu Yamaguchi worked as a draftsman designing oil tankers for Mitsubishi Heavy Industries in Nagasaki. Japanese industry was suffering as a result of World War II. Resources and materials grew more and more difficult to come by. Tsutomu, like many Japanese, felt Japan should have never started a war. He became despondent over his homeland’s situation and considered secretly poisoning his family if Japan was not victorious at the war’s end.

In 1945, 29-year old Tsutomu went on a three-month business trip to Hiroshima for his employer. On August 6, he and two colleagues were preparing to return to Nagasaki when Tsutomu realized he had forgotten his hanko  (a printing stamp used instead of a signature to authorize documents in most Asian countries). As Tsutomu hurried back to his workplace to retrieve his stamp, American bomber Enola Gay  was dropping an atomic bomb on the center of Hiroshima just under two miles away. There was a great flash and the subsequent explosion ruptured Tsutomu’s eardrums, burned him on the left side of his body and left him temporarily blind. He crawled to shelter and, after resting for a bit, set out to find his colleagues. He was happy to find that they, too, had survived and the three spent the night in an air-raid shelter where they received proper medical attention. They returned to Nagasaki the following day. Tsutomu was given additional treatment. Despite being heavily bandaged, he returned to work on August 9th.

At 11 am, while Tsutomu was describing the horrific ordeal he experienced in Hiroshima to his supervisor, American bomber Bockscar  dropped an atomic bomb on Nagasaki, just under two miles from Tsutomu’s workplace. This time, Tsutomu was unharmed in the explosion. His bandages, however, were damaged and contaminated. In the following days, he suffered a high fever from infection.

In later years, Tsutomu became a vocal opponent to nuclear arms, actively campaigning for disarmament. He participated in a documentary about nijū hibakusha  (double atomic bomb survivors). Although there were approximately 165 claims of double atomic-bomb survival, Tsutomu is the only one officially recognized by the Japanese government.

Although he lost his hearing in one ear, Tsutomu led a relatively healthy life. He experienced health issues much later in life and eventually succumbed to stomach cancer in 2010 at the age of 93.