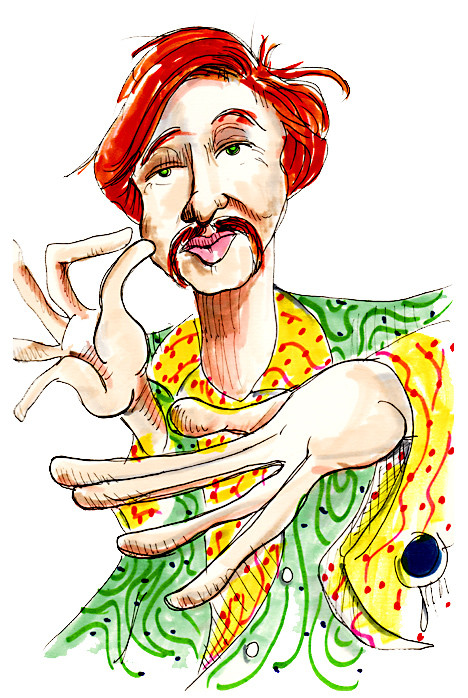 Viv Stanshall hated being referred to as “eccentric”. He felt it suggested that he was putting on an act. He wasn’t. When he and band-mate Neil Innes first met, Viv was wearing checked pants, a Victorian frock coat, purple glasses, pink rubber ears and was carrying a euphonium.

The Bonzo Dog Doo-Dah Band (originally “Dada” Band, as an homage to the Dada art movement) was formed in the early 1960s by Viv Stanshall and fellow art student Rodney Slater. Viv named the band after a popular comic strip dog from the 20s. They were soon joined by Neil Innes, Vernon Dudley (to whose name Viv added “Bohay-Nowell”), Sam Spoons, Roger Ruskin Spear, “Legs” Larry Smith and Bob Kerr. They played an eclectic blend of 1920s jazz and novelty tunes. Their live “drinking music” was embraced by pub frequenters although their ventures into recorded music didn’t bring the popularity they had hoped for.

In 1966, songwriter Geoff Stephens, using the name “The New Vaudeville Band” released “Winchester Cathedral”, a novelty number that mimicked Rudy Vallee’s 1920s megaphone vocal style. The song was a worldwide hit and Stephens’ record company requested a tour. However, The New Vaudeville band was comprised of session musicians and wasn’t a real band. Stephens tried to recruit The Bonzo Dog Band to accompany him on tour, since they played a similar style of music. Only Bob Kerr accepted the offer. The remaining Bonzos were left in the unusual position of reclaiming their sound as the original and not look like “wannabes” in comparison to the copycat, yet more popular, New Vaudeville Band.

One of the Bonzos famous fans came to their rescue. Paul McCartney asked Viv and his band to appear in the Beatles film Magical Mystery Tour  and perform their song “Death Cab for Cutie”. This was followed by their signing on as the house band to a weekly BBC television show called Do Not Adjust Your Set.  The show, aimed at children, was a collection of off-the-wall comedy skits performed by Eric Idle, Terry Jones and Michael Palin in their pre-Monty Python  days. The Bonzos raucous performances fit right in.

As The Bonzo Dog Band’s popularity increased through the 60s and 70s, Viv suffered from anxiety, panic attacks and stage-fright. He battled his fears with alcohol and Valium. Between tours, Viv spent time in and out of hospitals trying to get a hold on his addictions. He managed to remain productive during these bouts, even producing several solo albums and contributing to fellow artists’ recordings, like Steve Winwood and Mike Oldfield.

Viv created Rawlinson End,  a satirical take on British aristocracy. It spawned a film and an album. He followed Rawlinson End  with Stinkfoot,  a comic opera. He continued to collaborate with other musicians, do commercial voice overs and publish a print version of Rawlinson End.  Whether it was being creative or fighting his demons, Viv always kept busy.

The reckless Viv often drank and smoked in bed, once even setting his beard on fire. On March 6, 1995, Viv was found dead in his North London apartment following a fire. He was 51.