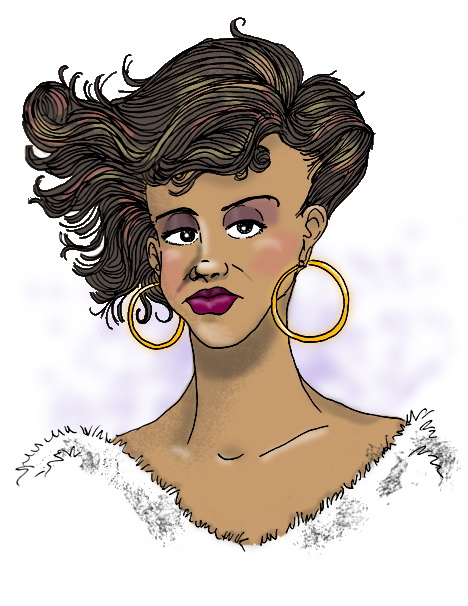 “There is a remedy for everything. It is called death” — Portuguese proverb

In the nearly five year existence of this blog, I have related over two hundred stories of death. I have also chronicled numerous excursions to cemeteries – one of my favorite hobbies. I guess the Portuguese are on to something. So, for this week’s Illustration Friday suggestion, I offer the story of singer Phyllis Hyman, a fellow Philadelphian who sought the remedy for everything.

The eldest of seven children (and a cousin of Earle Hyman, Bill Cosby’s father on The Cosby Show ), Phyllis Hyman landed a place with a national singing tour upon her graduation from a Pittsburgh music school. She performed with several vocal groups including leading her own band Phyllis Hyman and the P/H Factor. She also played a small role in the 1974 biopic Lenny  with Dustin Hoffman as comedian Lenny Bruce. She caught the attention of a former promoter from Epic Records and signed to his fledgling Roadshow Records label.

Phyllis became a popular background singer for many R & B groups. She had a chart hit with a cover of The Stylistics’ Betcha By Golly Wow  performed as a duet with jazz drummer/producer Norman Connors in 1976. She released her self-titled debut in 1977 and followed it with Somewhere in My Lifetime  in 1978, her sophomore effort produced by label-mate Barry Manilow. As her star was rising, she married her manager Larry Alexander. Alexander introduced Phyllis to cocaine, which started her on a lifelong addiction to the drug. Soon, her personal and professional relationship with Larry ended.

Determined to continue with her interrupted acting career, Phyllis appeared on Broadway in Sophisticated Ladies,  a tribute to Duke Ellington. Her performance netted her a Tony nomination. In 1983, she recorded the title track for the James Bond movie Never Say Never Again.  However, a contract dispute between the songwriters and Warner Brothers kept her version out of the final film and an alternate composition performed by Lani Hall (wife of Herb Alpert) was used instead.

On June 30, 1995, a few hours before her scheduled performance at the famed Apollo Theater, Phyllis’ body was discovered in her New York apartment. She had overdosed on pentobarbital and secobarbital. A suicide note read: “I’m tired of singing. I’m tired of living. Those of you that I love know who you are. May God bless you.” Phyllis was 45 years old.

HERE is my original line drawing before adding color.