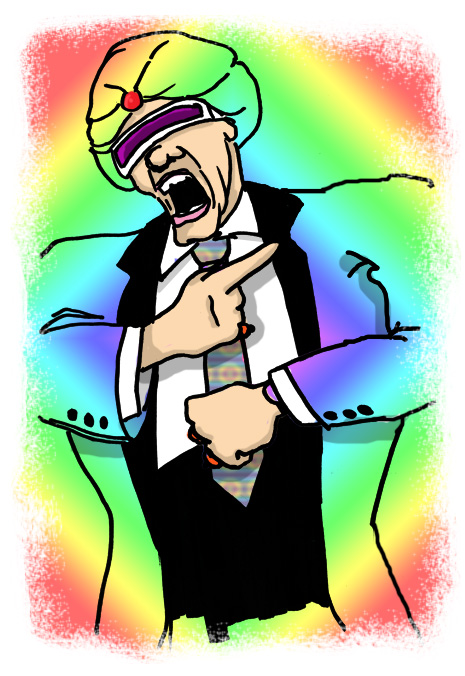 Ernie Roth entered show business as a disc jockey in the early 1960s. Soon, he became involved with professional wrestling and began managing in the Detroit are using several different stage names, including “Mr. Clean” and “J. Wellington Radcliffe”. He represented Michigan native Edward Farhat, who wrestled under the guise of a rich but crazed Syrian royal named “The Sheik”. Ernie portrayed his mentor/overseer and called himself “Abdullah Farouk”. He wore outrageously wild clothing, sequined turbans and wrap-around sunglasses. He created the character of the interfering manager by insulting fans and illegally aiding his proteges during matches, well out of the referee’s line of vision. He became one of the the most hated managers in wrestling, to the delight of fans.

Ernie joined up with the World Wide Wrestling Federation (now the mighty WWE) and changed his character name to “The Grand Wizard of Wrestling”. He continued to ham it up during ringside interviews and taunt fans with his put-on arrogance. He managed Superstar Billy Graham, a flamboyant wrestler who was the prototype for future stars like Hulk Hogan and Jesse Ventura. Ernie was in Graham’s corner in 1977 on the night he dethroned Bruno Sammartino as WWF Champion. Along with fellow “bad guy” managers Lou Albano and “Classy” Freddie Blassie, Ernie was in the spotlight acting the jerk, getting jeers and adding to the show in the infancy of the huge business of professional wrestling.

In complete contrast to his overbearing public persona, the private Ernie was a Jewish closeted homosexual who liked to cook chicken from his grandmother’s recipe for his long-time roommate, wrestler “Beautiful” Bobby Harman.

Ernie passed away from a heart attack in 1983 at the age of 54. Prior to a match just after Ernie’s death, Sgt. Slaughter silently saluted an empty corner of the ring in tribute to his late manager.