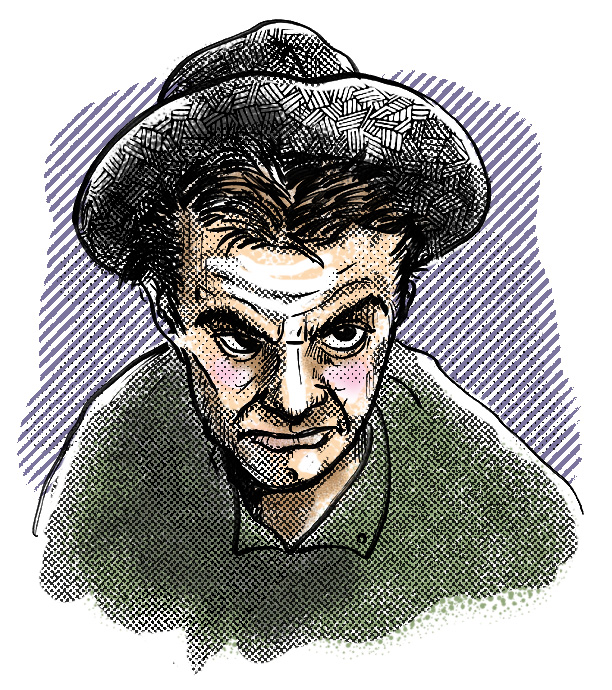 Eighteen year-old Leo Gorcey had just lost his job as a plumber’s apprentice. His father and younger brother, both successful vaudeville performers, persuaded Leo to try out for a part in the play Dead End. The Gorceys each got small roles as members of a street gang. When featured actor Charles Duncan left the production, Leo took over the more prominent role of “Spit,” the quarrelsome troublemaker.

In 1937, Dead End made the jump to the big screen and so began Leo’s twenty-year reign as one of the busiest actors in Hollywood. From 1937 to 1939, he starred in seven Dead End Kids  films. From 1940 to 1945, he starred in twenty-one East Side Kids movies. In 1944, he had a recurring role in the Pabst Blue Ribbon Town radio show, starring Groucho Marx. (Leo was married five times, including five years to Kay Marvis, who went on to marry Groucho Marx after her divorce from Leo.)

In 1946, he starred in his first of forty-one Bowery Boys  films, a franchise that lasted ten years. Leo, the self-appointed leader of the gang, became known for his consistent misuse of words and “get rich quick” schemes. Leo’s wiseguy character Terence Aloysius “Slip” Mahoney was the foil to rubber-faced Huntz Hall as the dim-witted “Sach.” Using the stage name “David Condon” to avoid claims of nepotism, Leo’s brother David was featured in minor roles in the series. Leo’s father, Bernard, played Louie owner of the sweet shop that served as the Bowery Boys’ home base. The series made no bones about its formula. They essentially waited for the more popular (and funnier) Abbott and Costello to make a picture and the Boys would copy the same premise several months later. Bud and Lou would make a film about ghosts and Leo and company would make a film set in a haunted house. An Abbott and Costello comic safari adventure would soon be followed by a “Bowery Boys in Africa” romp.

Leo made several non-Bowery Boys films in the 1940s. During production of Out of the Fog in 1941, Leo repeatedly blew simple dialog, much to the chagrin of director Anatole Litvak. Able to take no more, the frustrated Litvak screamed, “Gorcey, as an actor, you stink!” The always arrogant Leo shouted back, “Don’t you ever, ever  scream at me like that again!,” and stormed off the set. A few hours later, he returned to do the scene, and again, blew the same line. Litvak walked over to Leo and quietly whispered in his ear, “Gorcey, as an actor, you still stink. And notice that, this time, I’m not shouting.”

In 1955, Bernard Gorcey was killed in a car accident. A distraught Leo found comfort in alcohol. He regularly showed up drunk for a day of filming. After an intoxicated rage on the set of the film Chasing Las Vegas,  Leo was refused a pay raise and he quit the Bowery Boys. The series continued for seven more films without him. He appeared in a small role in the all-star comedy It’s a Mad, Mad, Mad Mad World  in 1963. He had a brief reunion with Huntz Hall in the 1966 head-scratcher Second Fiddle to a Steel Guitar,  his final role.

In 1967, art director Robert Fraser and designers Peter Blake and Jann Haworth created the Grammy-award winning cover for The Beatles’ Sgt. Pepper’s Lonely Hearts Club Band  album. The cover photo showed the Fab Four in full military regalia surrounded by a collage of life-sized cut-outs of their heroes. Among the famous faces were Bowery Boys alumni Huntz Hall and Leo Gorcey. Hall, a favorite of John Lennon, was flattered to be included. Leo Gorcey, however, demanded payment of $400 for using his likeness. His face was edited out of the cover’s final version.

Years of heavy alcohol abuse took its toll on Leo and he died from liver failure one day before his 52nd birthday.