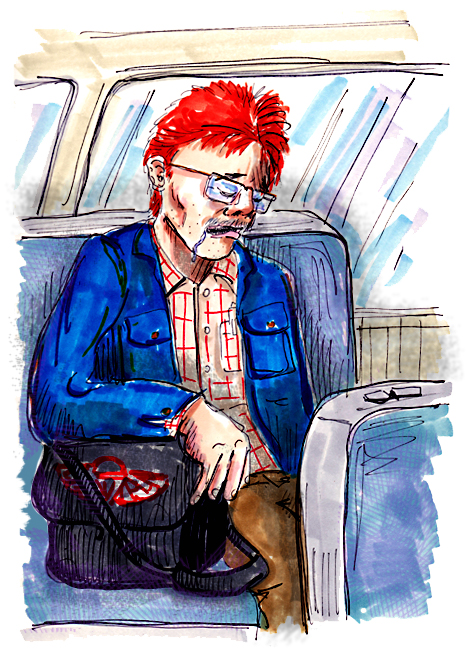 The morning began like every morning begins. My alarm went off at six and I smacked the snooze button every ten minutes until I kicked myself out of bed at 6:30. I showered, brushed my teeth and checked the mirror to see if I could get away without shaving for one more day. I exited the bathroom and headed downstairs. I flicked on our Keurig coffee maker and while the water was heating up I ran down the basement steps to grab a matching pair of socks out of the dryer. Back in the kitchen, I watched as hot water purged through my selection of K-Cup and emptied its brewed contents into a waiting mug. After adding a splash of half-and-half and one packet of Sweet ‘n Low, I carried my coffee and my socks back upstairs to watch the first half-hour of The Today Show  while I got dressed. As the clock came up on 7:40 am, I snapped off the TV and grabbed my cellphone and canvas messenger bag. Mrs. Pincus was asleep, still snuggled under several blankets, when I kissed her and whispered “goodbye”. I crossed the hall to say “goodbye” to my son, curled up under his own blankets. Although they each uttered a closed-mouthed “hum”, they may or may not have heard my actual farewell  as is the case most mornings. I scrambled down the stairs, grabbed my denim jacket and pulled it on as I hurried out the door. I ambled to the train station at the end of my block, less than a minute walk from my front door. Most mornings, I see my friend Randi and we ride the train together to our destination, as we both work in the same office building in center city Philadelphia. This particular morning, Randi was not on the platform. Too bad for me.

At 7:50, the train stops at Elkins Park and I get on. It then proceeds on to its scheduled station stops at Melrose Park, Fern Rock, Temple University and Market East until it reaches my journey’s end, Suburban Station. My entire morning commute covers five stations and lasts approximately twenty-five minutes. When I ride with Randi, we are engaged in conversation that lasts the whole trip, usually continuing until we reach the elevators in our building’s lobby. Since Randi was obviously relying on another route to work this morning, I turned to my dog-eared copy of Carson McCullers’ The Heart Is a Lonely Hunter  to pass the time. I boarded the train, selected a seat at the rear of a relatively empty car, pulled the book from my bag and began to read. I had been struggling through Miss McCullers’ Southern Gothic debut, that it now had taken on the characteristics of a high-school reading assignment rather than a source of enjoyment. The train came to a stop at Melrose Park and, unable to focus, I returned the book to my bag and closed my eyes for a quick nap. Too bad for me.

Suddenly, my eyes shot open. The train was in a tunnel and the car lights were flickering. I was groggy and disoriented. Through bleary and unadjusted eyes, I looked at my watch and I saw it was 8:10. However, since I was in a tunnel, I didn’t know which  8:10 of the day it was. I couldn’t remember how long I had been asleep. The train pulled into Market East, the first underground station on my regular morning journey.  My foggy and sleep-addled mind surmised that I was actually on my way home and it was 8:10 in the evening. I convinced myself that I must have traveled all the way to the end of my homecoming train’s line in Glenside  where no train staff had awakened me  and now I was on a return trip to center city. In a panic, I hopped off the train and frantically dialed my wife at home. As the phone rang, I was annoyed that she had not called, wondering why I had not arrived home at my usual 5:30. After four or five rings, my wife’s hushed voice whispered “Hello” from my cellphone’s speaker. I blurted out, “I’m okay! I’m on my way home. I must have fallen asleep on the train, came back from Glenside and now I’m at Market East. I’m getting on a train to Elkins Park and I’ll be home soon.” I rambled on so quickly, I didn’t allow my bewildered wife to get an interrupting word in. I paused and followed my rant with, “I can’t believe you didn’t call me! Didn’t you wonder where I was?”

She was silent, then she cleared her throat and said, “Well, I was asleep” and she trailed off.

“I’m three hours late coming home and you didn’t think to call me?”  I was starting to get angry. “Well, forget it! I’ll be home soon.”

“What are you talking about? Why are you coming home?” She sounded as confused as I felt.

“I’m coming home!”, I said one last time and I pushed the “END” button on my phone as I approached the information desk at Market East to ask the time for the next train to Elkins Park.

My wife sat in our darkened bedroom and stared blankly at the phone. The first thought to cross her mind was “Well, a twenty-seven year marriage was a good run.” Knowing full well that I had just left the house twenty minutes earlier, she began to cry, assuming I had had a stroke while riding the train.

I boarded the Elkins Park-bound train and called home again. I lowered my voice, so as not to attract the attention of my fellow passengers to my slightly embarrassing situation. Once again, I explained the “fell asleep on the train” scenario to my emotional wife. During my explanation, the train emerged from the tunnel  into the harsh sunlight of the morning. Suddenly, it hit me. I had been asleep for merely moments, on my way to  work  not hours, on my way home.  It also occurred to me that Mrs. Pincus must have thought I had a stroke. “Um, I’ll call you right back.” I said to her and ended the call. All that had just transpired became instantly clear to me. I looked at my watch again and up to the sky and concluded the correct time of day. I jumped off the train at Temple University and I waited for the next train to my proper terminus. And I called my wife. Again.

Mrs. Pincus answered on the first ring. She hit me with a battery of inquiry. “Are you okay? Where are you? Did you have a stroke?” I assured her I was now fully aware of the situation and I was now headed in the right direction and I did not have a stroke. It took several repeat affirmations but I finally convinced her that I was, indeed, fine.

Too bad for me.