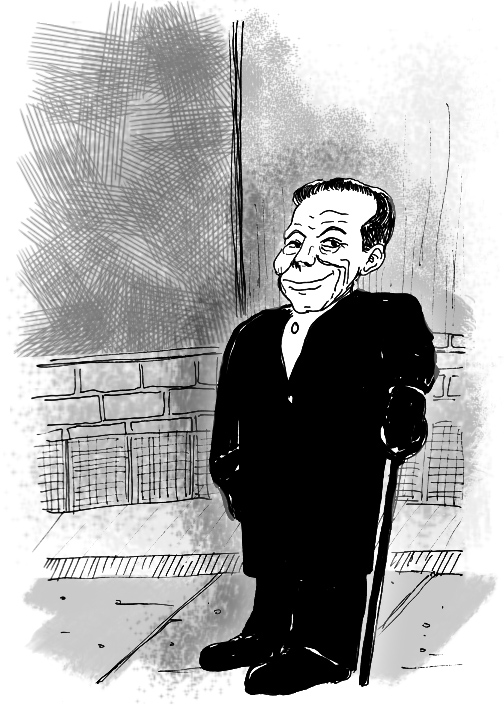 Michael Dunn wasn’t going let a little thing like dwarfism stand in the way of his career aspirations. A veritable child prodigy (reading at one; spelling bee champ at 13), Michael also began to develop his entertainment skills as a youngster. He would often gather small audiences on street corners and give an impromptu singing performance.

He continued singing and performing when he entered he University of Miami in 1953. He appeared in campus talent shows and participated in the football cheerleading squad. After graduation, he held a variety of jobs  switchboard operator, hotel detective (“Who’d ever suspect me  of being a detective?”, he’d joke)  and eventually, nightclub singer. He took small parts in dramas on Broadway, including a Tony Award nominated performance in The Ballad of the Sad Cafe.  He followed that with an Oscar nominated performance in the 1965 film Ship of Fools.  In the middle 60s, he teamed up with actress Phoebe Dorin and the two created a popular musical-comedy act known plainly as “Michael Dunn and Phoebe”. This led to the pair being cast in the popular action series Wild Wild West. Michael made ten appearances as the evil Dr. Miguelito Loveless, a mad scientist who schemed to capture and rid the world of his nemeses, Secret Service agents James West and Artemus Gordon. Loveless threatened with elaborate devices, forerunners to the future “steampunk” genre. Phoebe played Dr. Loveless’s devoted assistant, Antoinette.

As his popularity grew, he was in demand and took guest roles in other shows like Voyage to the Bottom of the Sea, Bonanza and the pilot episode of the spy spoof Get Smart.  He gave a memorable performance as Alexander in the “Plato’s Stepchildren” episode of Star Trek, notable for the first presentation of an inter-racial kiss on television. Despite his small stature, he gained a reputation as a “ladies’ man”. He attended and was welcomed at many Hollywood social gatherings. A popular anecdote (though most likely an untrue one) relates a meeting between Michael Dunn and tall, statuesque Julie Newmar, known for her campy portrayal of Catwoman on the Batman  series. Michael allegedly propositioned Miss Newmar at a party, saying, “I would love to ravage you.”  Julie, who stood nearly three feet taller than the diminutive Michael, quickly answered, “If you do… and I find out…”

In 1973, Michael was in London to co-star with Elizabeth Taylor in The Abdication  when he died in his sleep in the Cadogan Hotel. Autopsy reports had shown that although the left side of his heart was normal, the right side was hypertrophied to twice its normal thickness. Lifelong heath issues were blamed as contributing factors as well. Michael was 38 years old.