The Illustration Friday challenge word this week is “lesson”. 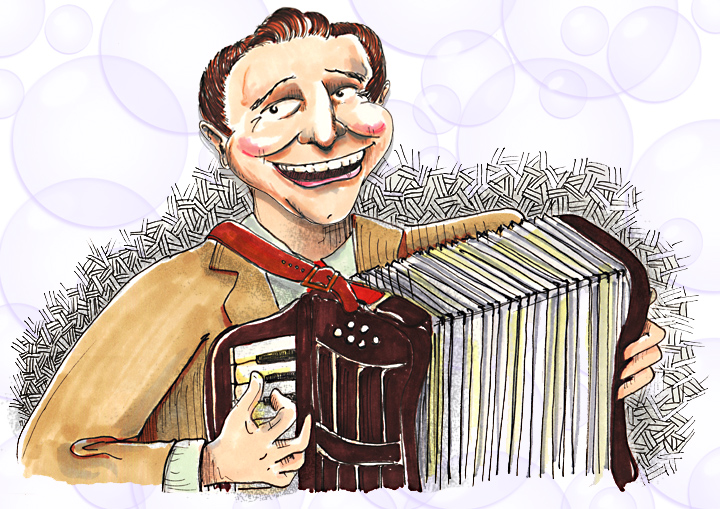 “Dreams do come true, even for someone who couldn’t speak English and never had a music lesson or much of an education.”  Lawrence Welk

Lawrence Welk couldn’t wait to get the hell out of North Dakota. He was the sixth of eight children born to German parents, immigrants by way of Russia. The tiny town of Strasburg was settled by native Germans. Lawrence begged his father for $400 to purchase an accordion, promising that he’d work on the family’s farm to repay the loan. Ludwig Welk rigidly held his son to the promise. Fulfilling his financial obligation, young Lawrence, with accordion in tow, promptly left the farm on his 21st birthday. His dream of a career in music lay ahead.

Throughout the 1930s and 40s, Lawrence led a travelling big band, performing his “champagne music” (named for its light and bubbly feeling) all over the country. He and his band made several “soundies”, early incarnations of “music videos” played on film jukeboxes in restaurants and bars. He brought his band to New York City’s Roosevelt Hotel where they played extended runs. In 1949, Lawrence and the band had a popular show on ABC radio sponsored by Miller High Life, “The Champagne of Beers”. The show ran for three years.

In 1951, Lawrence moved to Los Angeles. His local music show was picked up by the ABC television network in 1955. Lawrence assembled a group of resident musicians, singers and dancers, meticulously choosing those who would convey a wholesome, family-friendly presence. His policy was to present the popular songs of the day as entertainment for everyone. He added to the happy atmosphere by running a bubble machine during certain numbers. The formula worked. The Lawrence Welk Show  ran on ABC for 31 years. The show remained extremely popular despite the country’s changing taste in music during it’s run. (One interesting and unintentionally funny performance features a fresh-faced, all-American couple smiling happily as they interpret Brewer and Shipley’s subtle drug-referenced hit “One Toke Over The Line” aimed at Middle America. An oblivious Lawrence refers to the tune as a “modern spiritual”. It can be viewed HERE.)

Seeking a younger audience, ABC unceremoniously canceled the show in 1971. Upset but not discouraged, Lawrence began producing the show on his own for first-run syndication. This version ran for eleven years. Ironically, it ran on 250 ABC affiliates. A special collection of selected shows were repackaged for syndication to public television and continue to run today.

Throughout his entire career, Lawrence made various lucrative investments, including real estate and music publishing. By the time he retired in 1982, he had become quite wealthy. He often donated money to his hometown of Strasburg  with the explicit stipulation that absolutely no funds be allocated for restoration of his family’s homestead. When a tourist attraction located at Lawrence’s actual birthplace opened, he refused repeated invitations and wanted no part of any of it.

After enjoying a ten-year retirement filled with golf, two autobiographies and producing the occasional television special, Lawrence passed away from pneumonia in 1992 at the age of 89. He never returned to the farm he left in his youth.